Today my full-sunshine reputation went totally down the toilet.

It rained.
Not a drizzle, but rain.

Well, at times it drizzled, but I guess when it drizzles constantly and in buckets, then you could arguably call it rain. 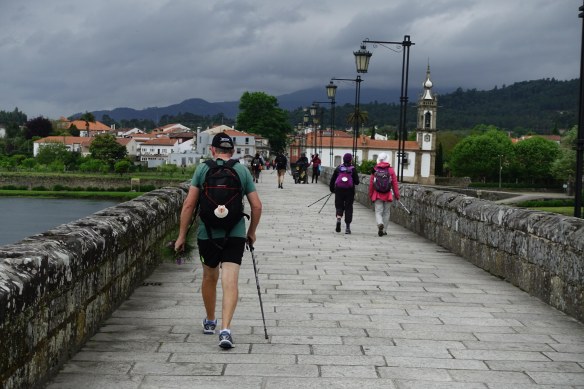 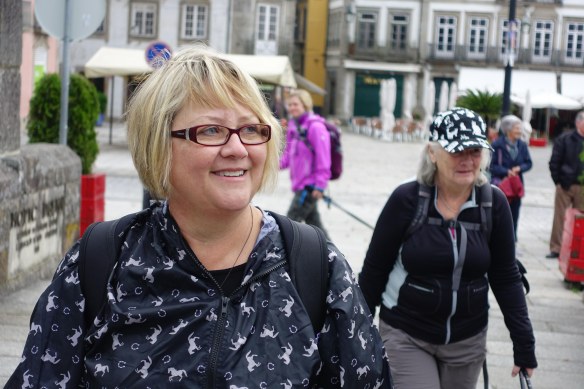 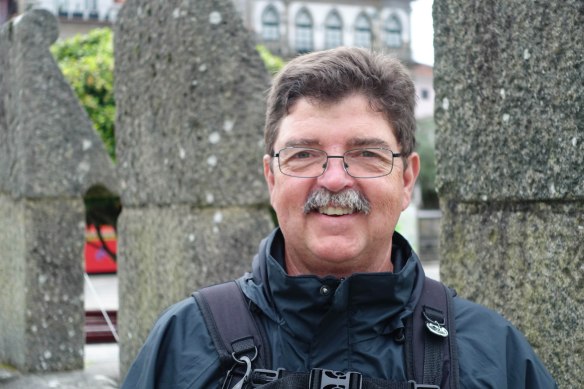 We then made our way to the Last-Stop cafe before the big climb up to Rubiaes. Before I began the climb I had my requisite two Coke Zeros. 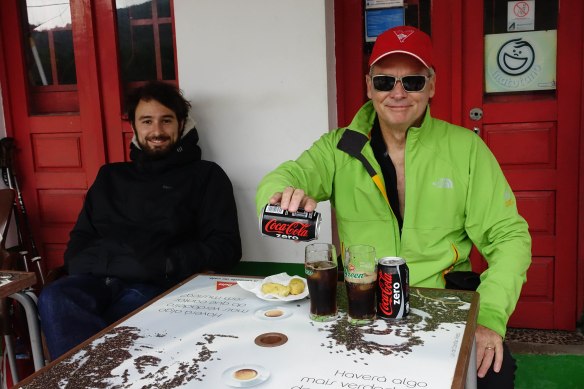 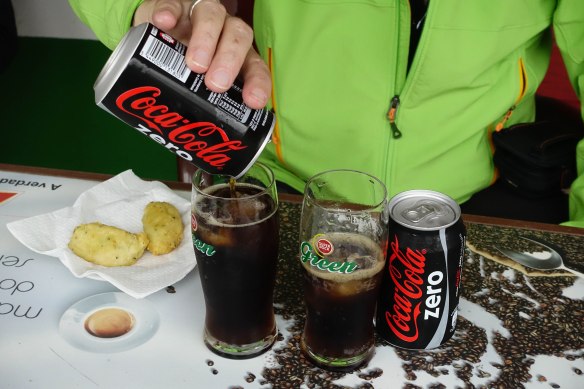 I remember last time I did that climb it was a struggle. It was hot, and I was knackered, and my mate Steve helped me along.

Today it was a breeze. I scampered up the climb no sweat. Probably because it was cooler, I was stronger from some solid training beforehand, and last year I did the Via de Francesco, which made today look like a cake walk.

I’m not sure what a cake walk is, but I suspect it’s a walk you do when you want to go get some cake…

Our group did well today.

Some jumped the hill climb, because they’ve developed injuries. The others did the climb without difficulty. 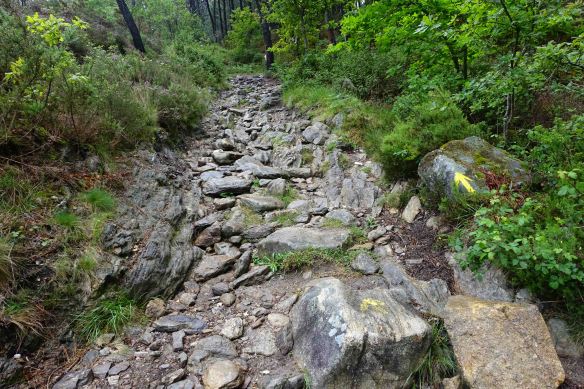 Bill the filmmaker was up top documenting it all. 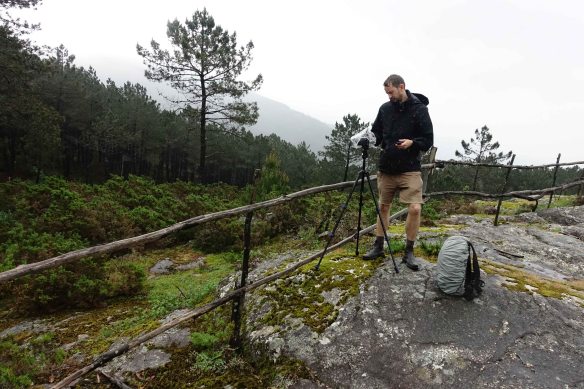 I’m getting to know them.

The front mob consists of Jan, who is lithe and fit and clips along with her mate Marilyn at a solid pace. Vivienne walks with them too – and they natter as they walk, often chortling with laughter.

Walking with them for a bit, they reminded me of the three Witches of Eastwick –

(Ladies, you choose which one is which!) (or witch one is witch… haha)

Walking with them often is Ian, who walks without poles, wears shorts even when it’s bloody freezing, and makes walking 6kms per hour look effortless. 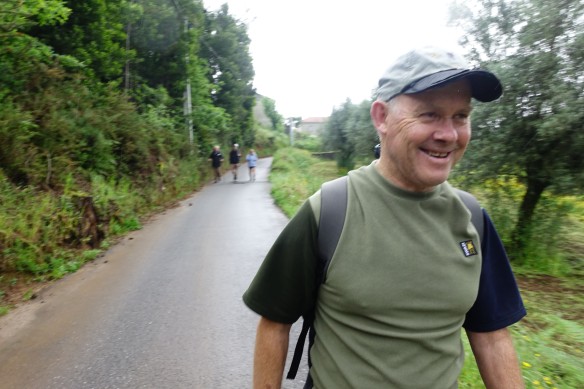 Today Bart was our front runner – and his daughter Merissa and Jennifer officially took the title of the back mob. The two of them had a lovely walk in the rain, Merissa taking photos which she showed me later. She took them on her smartphone and now I hate her too. She has a really good eye.

There are a lot of good photographers in this group. Maybe it’s a New Zealand thing.

Today I walked up the mountain with a lady who is not with our group. Her name is Linda. She is in her 60s, although she looks younger, and her husband works for the UN. 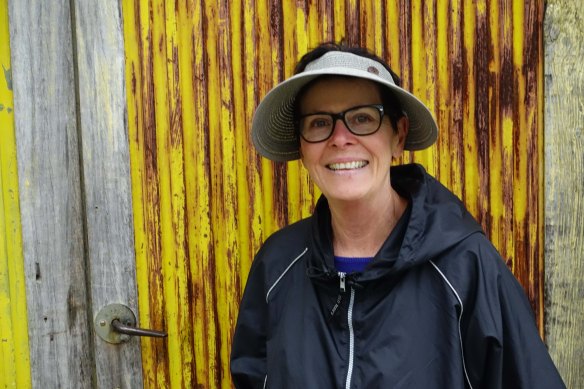 I walked with her because yesterday she’d gotten talking to some in our group and she had expressed some nervousness about doing the climb today. She’s carrying some serious injuries from a broken neck sustained in a horse riding accident.

She can’t use poles, she can’t carry a backpack, and she was worried about the climb. So I thought it might be handy for someone to accompany her.

As we began the climb we chatted, and she told me that her husband works for the UN as an investigator. Like a detective. He chases down bad guys within the UN – at the moment those in the peace-keeping forces that are allegedly involved in illegal activities, such as rape, misappropriating funds, selling their firearms and weapons to the insurgents, etc.

He’s currently in a remote part of the Central African Republic, and she’s worried about him because she hasn’t heard from him for a while. I said that surely in his job, he would be a target. His life would be in constant jeopardy. She agreed, and said that he usually has security guards around him, but on this current assignment they didn’t show up, and so he called in for backup but because it’s so remote it’s taking a while.

Linda had a brief communication from him this morning before she set off – and said that she was a wee bit worried because he was worried. Later this evening she still hadn’t heard from him.

She handled the climb ok. It turned out she was a strong and accomplished walker.

At the point at which you cross into Agualonga, there is a large cross which has accumulated many more stones and mementos since I was last there… 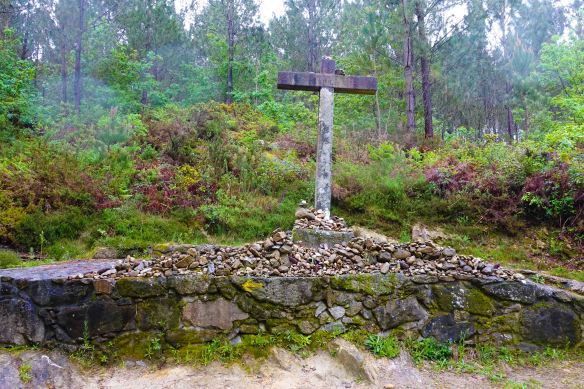 I always find it a very emotional experience to think about the stories behind some of the photos left at these crosses. 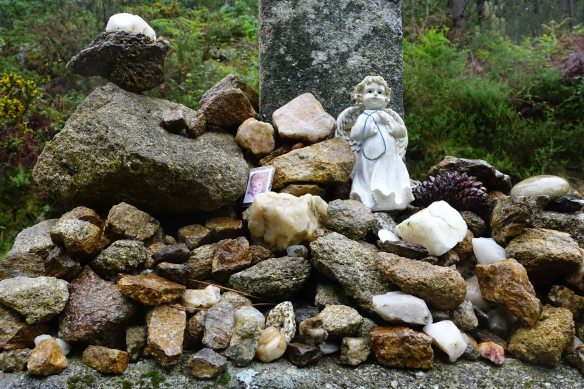 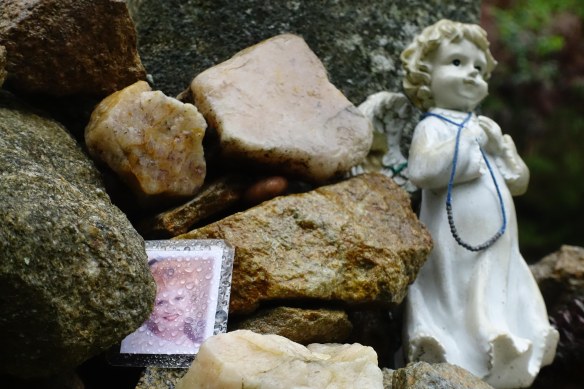 We got to our Casa Rurale in the mid afternoon, and everyone was wet, cold, and bedraggled. We all had warm showers in rooms that are quite luxurious. Later we had a gorgeous home cooked meal which began with cod cakes and Padron peppers. 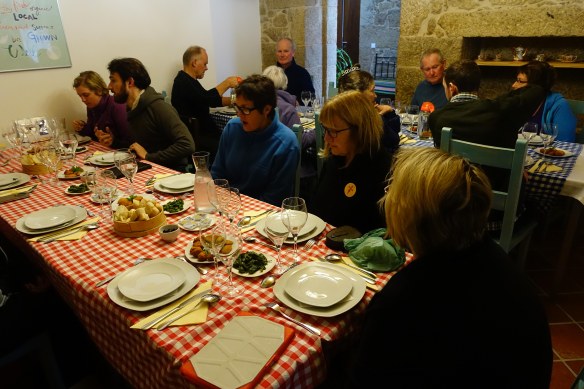 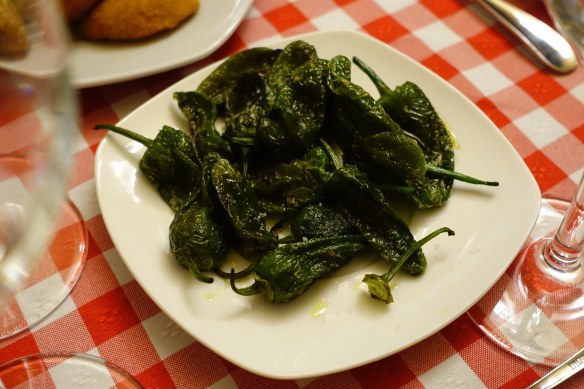 Towards the end of the dinner Neville, who is a supreme raconteur, told us a joke:

The friend said sure. Okay. Here is a quick and easy joke:

A Spanish fireman got married, and his wife bore him twin sons, so he called the first one Jose, and the second one Jos-b.

They both laughed, and the man said – Thank you, that’s perfect.

So the day of the wedding came, and the man stood in front of the assembled throng, and began by saying: I have a little joke for you. A Spanish fireman got married, and his wife bore him twin sons, so he called the first one A-hose, and the second one B-hose.

When Neville told this joke we all thought it was hilarious, but then again it could have been the White Port… 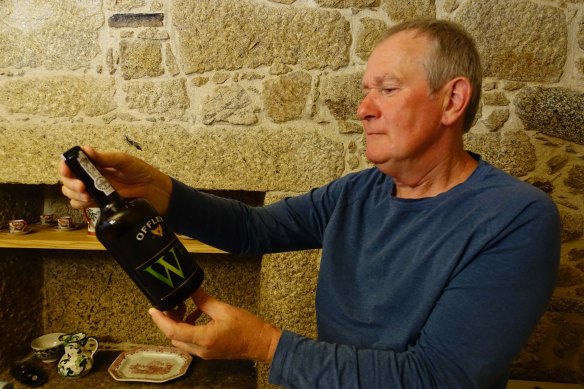 I’m sure there are many of you who follow this blog who are anxious to know how my knee is going. I decided not to bring my brace on this Camino – believing that if I took it, it would only set an intention for my knee to give me problems.

(A MRI taken a while ago showed that the cartilage in my right knee has completely left the building, and I am technically bone-on-bone. My orthopaedic surgeon told me I had to wear an elaborate brace when walking any distance, and said a knee replacement was not a matter of “if,” but “when.”)

So I’ve been walking 5 days now, and done about 100kms, without the brace, and the knee is holding up ok. I’ve had some twinges, and today was a real test, going up that mountain, but particularly coming down the other side, which put a lot of stress on the knee.

I checked my knee this evening and noticed that it’s quite swollen. So I put some Voltaren cream on it.

I hope it gets me to Santiago ok. I don’t wish to go on Ibuprofen again… 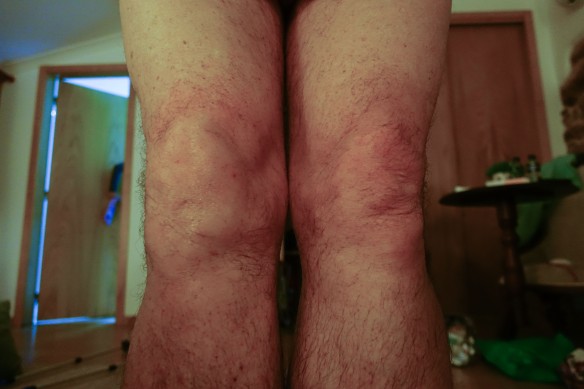