It was a bit of a rest day for Jennifer and me today.

We’ve been going flat out ever since we hit India.

Most of our work here in Dharamsala is done, so after a late breakfast we walked down to the Dalai Lama Temple, to replenish our energies. 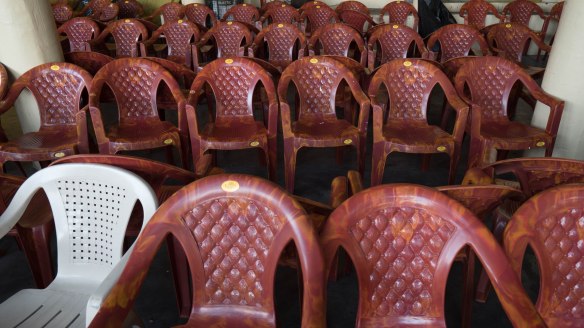 This concerned me for a number of reasons:

You see, my problem was I’d worn my Scarpas, which are my serious Indian walking boots. They cost about $350. Now you might say: Bill, you moron, if you knew you were going to the Dalai Lama temple, you must have known you’re going to have to take off your footwear, so why wear your $350 Scarpas?

Well, I’ll answer that by saying that I would never even think that anyone would steal shoes, or boots, outside the Dalai Lama temple.

So there I was, inside the temple, with this incredible energy and these magnificent ancient Buddhist mandalas and statues all around me, and all I could think about was my boots outside on the rack, and someone stealing them.

And then of course I thought about impermanence, and suffering, and if someone stole my Scarpas how would I get back to the hotel? Because it’s about a kilometre and the road is rocky and full of sharp pebbles and my feet are soft and tender.

And it would hurt.
And I would probably cry.

So my visit to the temple was fraught with suffering – and so the sign did the job it was intended to do. Which was to make me realise that I didn’t really need my boots, and if anyone stole them they probably needed them more than me – and after all there were much greater things to think about, such as how the Chinese have dispossessed these wonderful Tibetan people, and what damage they’ve done to their ancient religious sites.

Here are my boots in the rack, waiting for me after my temple visit –

Outside the temple, two men sat begging. One of them spoke perfect English. He had a friend in Perth. He wanted me to like his Facebook page.

For taking this photo I gave them both a donation –

She took a shot of me which is technically putrid –

Wandering back to the hotel, with my boots on thankfully, I saw a stand selling plastic Lotus blossoms. The late afternoon sun was highlighting them. I had to take a shot.