It’s getting dark here now as I sit in my hotel room near the Pantheon in Rome – with busker street guitar drifting in through the window – James Taylor’s You’ve got a Friend.

Two fantastic interviews – and in both I was told that I had a friend – a Guardian Angel – which is what saved my life in New Orleans.

The first interviewee was a wonderful scholar from a University inside the Vatican. He was a world renown physicist – and in studying the cosmos, he came to believe there was more to the universe than science could explain, and so he joined the Church.

He subsequently got his PhD in Theology, joined Opus Dei, and began to use his knowledge and understanding of science to understand the divine.

The second interviewee was also a member of Opus Dei – a Professor of Philosophy, again at the Vatican University. He spoke clearly and lucidly about Guardian Angels, and said that each of us has not only one, but many angels guiding us through life.

And here’s the thing, he said: We don’t have to believe in Christianity, or be religious at all. Our angels will still work for us – providing that we ask, he said. We have to ask. Otherwise the angels think we’re not interested in them, and they get bored. If we pay them attention, through contemplation or meditation or prayer, then they pull out all stops to help us.

He then went on to describe how the angels communicate with us – and talked of coincidence, synchronicity, numbers, songs on the radio, chance encounters, and other ways the angels try to give us messages.

Both men were articulate and highly intelligent, and they put their points of view forward in simple concepts devoid of religious dogma. If anything, they were almost reluctant and even embarrassed to bring religion into the discussion.

Opus Dei it turns out isn’t the big bogeyman that Dan Brown made out in The Da Vinci Code. They are made up of mainly lay people who basically believe that anyone can achieve sainthood or Christ consciousness, and that there’s sanctity in everyday life.

In that sense they’re not dissimilar to the Buddhists, who believe that anyone can become a Buddha, if they follow certain precepts.

Both interviews today fed the film wonderfully – not only because they open out the discussion to include spirituality from a religious point of view, but also from the perspective of science and philosophy.

As the sun began to drop we then went to St. Peter’s square, and filmed right under the noses of the Vatican police. Because we are a tiny crew with a small discreet camera, we were able to get away with shooting our required sequences without being put into a dungeon and being given the Spanish Inquisition.

Nobody expects the Spanish Inquisition!
(thanks Monty Python…)

A great day of filming – and tomorrow we have two more interviews lined up that promise to be just as fascinating. Then tomorrow night we jump a plane back to India, to get our interview with the Swami from Rishikesh, who will be in Delhi to launch his six million word encyclopaedia on Hinduism.

This is going to be an amazing film… 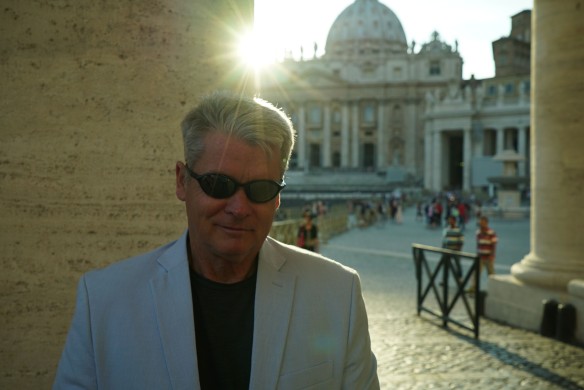