When I walked the Camino Frances last year, I came to a crucial junction.

I was about 10 kms outside of Burgos, and there were two routes into the city; one which went through the industrial outskirts, and was evidently a tough bit of walking – noisy and polluted and on tar all the way.

The other way went through parkland, but it wasn’t properly way marked, and many people got lost.

My situation was that I was in agony from my knee, and I didn’t particularly want to walk any further than I needed to. Equally though, I didn’t want to walk 10kms on bitumen through a dirty industrial wasteland.

The industrial route though took me into a small town where I knew there was a bus – and the Camino Bible – John Brierley’s Guide – said there was no ignominy in getting the bus and avoiding that horrible 10kms into Burgos.

I mean after all, if Brierley says it’s ok to get a bus, then who am I to argue? Especially as my swollen knee was putting it’s argument for a bus very vociferously.

So I was standing at this junction – the point at which the road went either towards the parkland route, or the industrial (bus) route – when I heard a voice yelling out to me from behind: “Hey, come with us! I know the way!”

And this is how I met Ivan the Terrible and his Beautiful Wife Giovanna.

Ivan the Terrible and his Beautiful Wife Giovanna – Camino Frances 2013

Ivan’s father had named him after the Russian movie, Ivan the Terrible – hence his name. Giovanna has a pixie beauty about her, hence her name.

I wrote in my book later that they turned out to be my Camino Angels. They saved me from possibly catching a bus – not that there’s anything wrong with it, to paraphrase Seinfeld – and they guided me effortlessly into Burgos through green parks and past cascading waterfalls.

In the book they feature prominently, because we subsequently intersected many times on our walk to Santiago. We had many laughs together.

That’s the magic of the Camino. Through a chance meeting outside Burgos, a friendship was established that will last a lifetime.

They live near Milan, and Ivan always told me that should I ever come to Italy, then Jennifer and I should stay with them. And so this past weekend, that’s what we did.

They hosted us in their beautiful house near Burgamo, east of Milan. They took us out to dinner at their favourite restaurant, and walked us around the glorious old town of Bergamo, which has to be one of the most stunning towns I’ve been to in Italy.

The following day they took us to their place on Lake Gardia, not far from Lake Como.

Giovanna cooked us her favourite pasta recipe, which was as good as any you’d find in a fancy restaurant, and that evening they drove us around the lake to a tiny little eatery tucked down a back lane in a small village and we had the best seafood pasta I’ve ever had ever in my entire life. Ever.

The next morning we had breakfast in a beautiful little cafe by the lake, then we said our goodbyes before driving down to Rome, to continue work.

Ivan the Terrible and his Beautiful Wife Giovanna could not have been more kind and generous this past weekend. And that’s what they were like on the Camino as well.

Beautiful gorgeous people whom I met on a long walk somewhere in Spain, and now they’re friends for life. 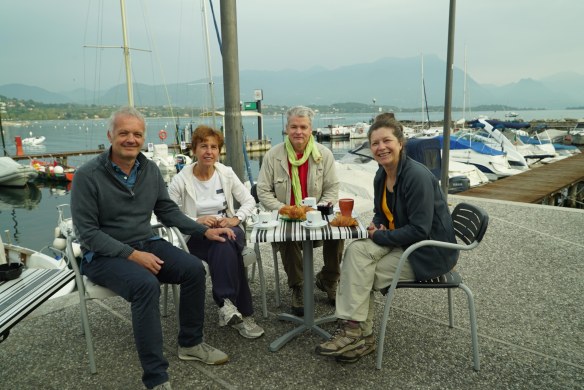 5 thoughts on “Camino friends for life…”