Italy turned out to be very important for the film.

I did nine interviews in all, and I also shot some wonderful visuals at the Vatican and elsewhere.

Each interview in its own way gave a crucial slant on intuition – and I know that there are some terrific “grabs” from each interview that I'll definitely be using in the film.

In overview I was surprised at the modernity of the views. And the lack of religious proselytising. For instance I did an interview this afternoon with a very esteemed Professor of Philosophy from one of the Vatican universities. (There are six in Rome.)

The Professor had traveled extensively in India, and had studied Hinduism and Buddhism. And so her take on intuition was informed by this much wider world view.

What's come through in these interviews though is that the voice that I heard in the car that warned me of an impending accident was an intercession from God, or one of God's agents – being an angel or a form of the Holy Spirit.

But the interviews went much deeper than this – and ranged from the spiritual to the philosophical to the scientific aspects of intuition.

All up I've shot close to 200GB of footage. That's a lot. About 8 hrs of interview from nine interview subjects.

The Italian contribution to the film might cut down to 15 minutes all up. But it will be fascinating, and intriguing, and it will provoke a lot of thought and discussion.

From a personal point of view there have been times when I've been deeply affected by what's been said in some of the interviews. And if I can capture that emotion quixotically within the film, then it will be a very fine film indeed.

About to board a plane now to return to India for an interview with a Swami, that could be the highlight of the entire movie! 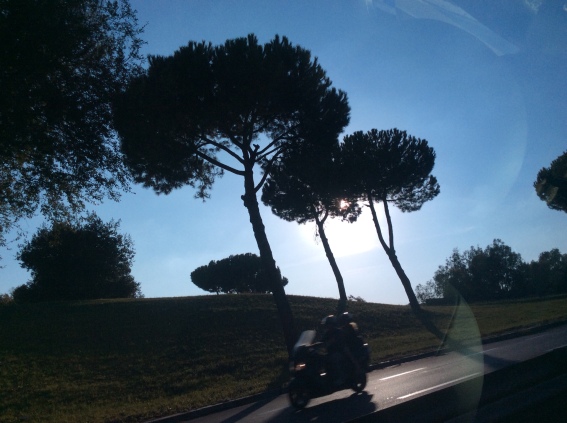 On the way to Rome airport

4 thoughts on “Italy in review”