( this was meant to be published last night, but the wifi went down in this hotel. It’s now 4:30am Sunday here… )!

Today I met Steve and Arlene for the very first time, and yet I felt as though I’d known them for years – we’ve corresponded so often and so regularly on this blog…

I also met Greg and Donna, whom I HAVE met before, back in Brisbane Australia. And I also met Marie-Dominic, from the Basque Country. (she refers to herself as Marie the Basque!) Jennifer and I spent some time with her in Santiago late last year.

It was wonderful to finally all meet up – although as a group we’re still not complete.

Peter & Julie I met on the slopes of the Pyrenees this time last year, and we very quickly became friends, bonding in the shock of a shared experience. Ken and Angela I’ve not met before – yet we’ve spoken on the phone and they sound like a delightful couple.

Already there seems to be a very strong sense of camaraderie between us all.

Steve and Arlene arrived first – and literally bumped into Jennifer of the lobby of the hotel. I came down and met them both – and my first impression was that they both looked so damn fit and healthy!

Steve is a champion bodybuilder, as most of you already know, and I went to give him a hug and it was like hugging a bag of cement. This guy is early 70s and has the physique of a 26 year old.

Arlene shone like a shiny thing – beautiful and radiant.

We all went to a coffee shop and the first thing I did was challenge Steve to an arm wrestle. 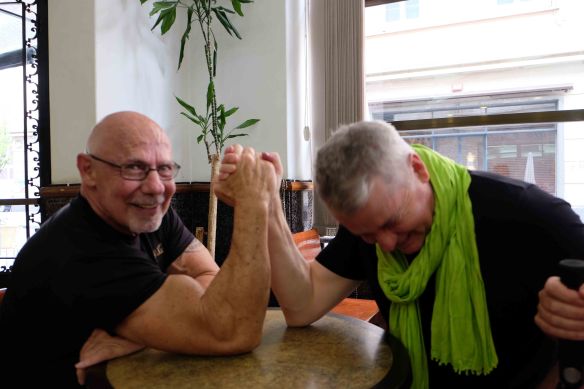 Note his bicep compared to mine.

I let him win.

(That just goes to show what a good pilgrim I am…)

Later we met up with Marie Basque – who was as equally beautiful and shiny radiant as Arlene – (what is it about these Camino women??) – and then we went out to dinner – later joined for coffee by Greg and Donna, who’d eaten very well at a restaurant near the start of the Camino down by the river. 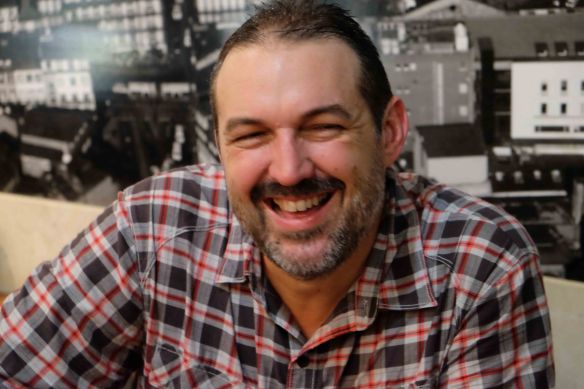 Even though they were tired from a long flight from Australia (with a one day stopover in London) nonetheless their weeks of training have paid handsome dividends – they both looked way younger and fitter than when I last saw them in Brisbane, before they’d taken the big plunge and decided to do this pilgrimage walk.

Well into the evening now, after dinner, and seven of us sitting around a table in a small cafe, talking with an ease and conviviality that completely belied the time we’d actually all spent together – perhaps all of two hours.

Tomorrow we meet up with Peter & Julie, and Angela and Ken. Then we’ll have a quorum. A  Camino quorum. Won’t that be cool!