Coming down into the lobby this morning, I heard – Bill! –and was greeted by Peter and his wife Julie, and their two friends Ken and Angie.

This now makes our complete group.

Peter and Julie started their Camino four days ago, from a town just north of Lisbon. So they’ve already walked a long way to get here. They looked super fit – and with their backpacks and poles and Camino shine, they looked like serious pilgrims.

I’d last seen them in Zubiri, on day two of the Camino Frances last year. It was wonderful to see them again. And great to meet Ken and Angie. This will be their first Camino, yet they’ve been doing some very serious training in preparation.

Ken has a sly sense of humour that coldcocks you from behind. I’ll have to be on my guard when I’m around him…

I stepped outside the hotel to take a phone call, and I noticed this young man who was obviously smacked out of his brain trying to scam a pretty young lady. I’d seen this girl earlier – she was a pilgrim on the Camino, and she was having trouble getting rid of this bloke.

I wandered over and gave him €5. He was effusive in his thanks to me. He thought that this was an act of chivalry so that I could hook up with the pretty girl. He asked where I was from – I told him Australia – and he then proceeded to tell me that Australia made the best party drugs in the world.

I asked if I could take his photo – 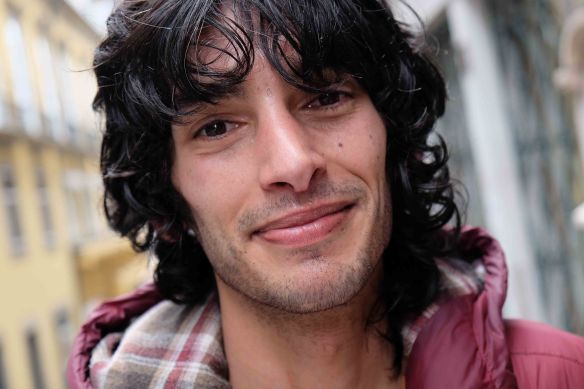 I walked back into the hotel, met up with Peter & Julie, Ken & Angie, and we went out and had coffee.

The waiter offered to take our photo. I instructed him carefully – even pre-focused and took a preview test shot of him sitting in for me, to show him the correct composition with proper head room, but of course he made a complete botch of it.

Here is his first attempt. 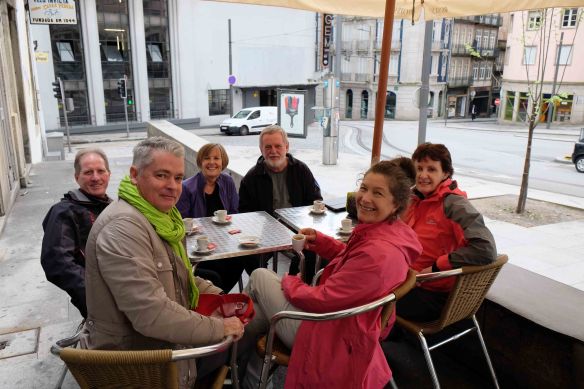 See? Too much head room. And I’d specifically told him about head room.

Here is his second shot. 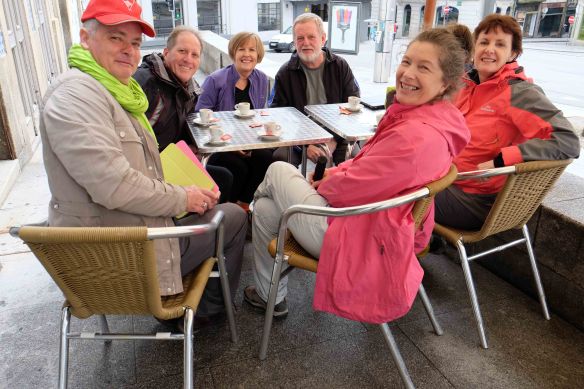 Again, totally unacceptable…  Too LITTLE head room this time. Again I took a shot of him sitting in for me, and told him why I’d framed it the way I had. 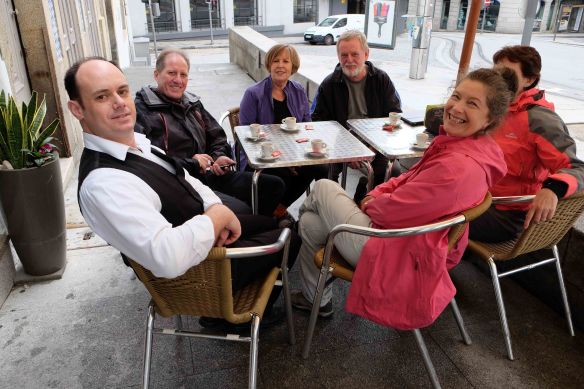 This is the correct amount of headroom. How hard is that? Jeeeeees. I mean, ok, the guy is just serving us coffee – but, if you’re going to take a photo, take it properly. Please.

Here is his final attempt. 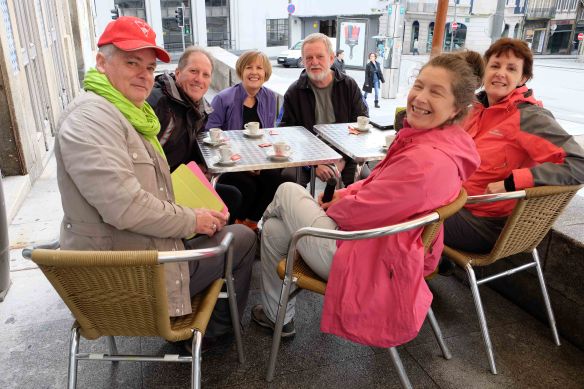 This is ok. Not great, but ok. The framing is still a bit how’s-your-father, but it’s acceptable.

Meanwhile, my new pilgrims who have just joined the tour, and have just met me, think I’m a complete and utter dick. A total control freak.

Thing is, Greg – of Greg and Donna fame – Greg who runs a pool business in Brisbane – Greg is smart. Greg has got my measure. You see, we left the hotel to head off to dinner, and I took a slightly circuitous route. I went up the hill, round the corner, along a street, and down the hill. I’d forgotten which way to go…

We’re standing at the lights, and Greg taps me on the shoulder and says: Bill, we’ve just come a full circle. Why didn’t we just go down the hill and turn left. Instead of going all that way up the hill, turning right, turning right again, going down the hill, and turning left.

If we were in the army this would be deemed insubordination.

I explained to him that it was my surreptitious way of getting us in training for the Camino, going up the hill and walking around the block, and that in fact instead of him pinning me with an implied criticism, he should be thanking me for making him a little bit fitter.

But I suspect he didn’t buy it.

Like I said, Greg is smart. I can see that I can’t fool Greg. Damn. I’m going to have to watch him. He has the potential to be traitorous. I think he sees me as a Captain Queeg.

The thing about leadership, you have to do everything with bold intent.

Even if you’re wrong.

Even if you’re lost.

Even if you can’t add up.

We ate out tonight at Pedros dos Frangos, the famous Portuguese chicken joint. The bill came, and it was €112. The tour hasn’t officially started yet – it starts tomorrow – so we’d decided to split the bill evenly. Twelve of us, that makes €10 a head, leaving a tip.

Someone hadn’t coughed up their €10. Perhaps they hadn’t heard, so I asked in a very commanding voice who hadn’t paid. I got these glares back from everyone thinking that I was accusing them of trying to shimmy out of coughing up €10.

And then Peter, who is a very successful accountant – a numbers guy – (and is unfortunately also a Hawthorne supporter but despite that, still a very nice bloke) – informed me that no-one had piked out on their €10, there were only 11 of us – so everyone had actually paid.

Then I remembered – Catarina wasn’t joining us till tomorrow.

If I hadn’t looked like a dick before, then I certainly did now.

We retired to the hotel bar and I ordered Port. I got the numbers wrong again and we got an extra glass. I shared it with Angie. It was arguable who needed it more, her or me.