So in these modern times, why not do the Camino in a car?

I have just driven the Portuguese Camino from Porto to Santiago in a Peugeot 208CC Coupe. So why can’t I get a Compostela?

The Peugeot looks like a donkey. And it acts like one too – but that could be just be me having difficulties with the stick shift.

Bikes are okay – but motor bikes aren’t. It’s okay to catch a train or bus for certain sections, but you can’t drive a car.

It seems like drivers are being discriminated against. Which must prompt the question – is that in the spirit of the “true pilgrim?”

There have been endless discussions here and elsewhere as to what constitutes a true pilgrim. I think we can all acknowledge that it really doesn’t matter whether you’ve carried your backpack all the way, or stayed in a Parador, or whether you’ve jumped a train between Burgos and Leon – it’s what’s in the heart that determines whether you’re a true pilgrim.

My heart, while I’m driving, is pure pilgrim. Believe me.

Especially when it’s pouring with rain.

Turning on the windscreen wipers beats donning a poncho, I’ll tell you that for free. Also, when it gets really cold, I turn on the heater. Fogs the windscreen sometimes, but who said being a pilgrim was easy?

There are exceptions to my pilgrim spirit while I’m driving. Tailgaters on the Autopistas, for instance – I’m not immune to yelling at them to f- off. And then of course I immediately regret it, realising I’ve momentarily lost touch with my inner pilgrim.

And when those pesky walkers with the backpacks and stupid walking sticks spill out onto the road, acting as if they own it, I have been known to blast them on my horn.

It delights me when they jump and curse me. It’s not very pilgrim-like to curse someone, buddy – I think to myself, grinning, as I whizz past.

And if I see a group of pilgrims up ahead walking on the road – my road – beside a puddle, I have been known to veer the car over a little bit and drench them all.

If you become a driving pilgrim you can have fun like me, I think to myself as I gleefully watch them in my rearview mirror as I speed away.

Being a driving pilgrim though is not all fun, let me tell you. You can develop very bad sores on your butt from sitting for long periods of time. And you can develop RSI from using the indicator too much.

It’s an important decision and one that you shouldn’t take lightly.

I would suggest, before you undertake a driving pilgrimage, you try out both types of sunglasses on a training drive. Only then can you make a fully informed decision.

I’m thinking I should publish my own Brierley guide – The Way of St.James, by car. I’d detail the practical route, by Autopista – and the mystical route, by secondary roads.

I’d include those hotels that have free parking, and the gas stations where they wash your windshield. I would explain how the tollways work, which lane to choose as you approach the booths, and where the speed cameras are.

I would also make a list of the historical buildings and churches that you can see from the road as you drive past.

If you’re a driving pilgrim, the choice of rental vehicle is critical.

It should have no more than a 1.6L engine, and of course it has to be diesel, and preferably a stick shift. No automatics for the “true” driving pilgrim. And if you really want to be deemed a true driving pilgrim, then Air Con is a no-no.

Also, a true driving pilgrim would never be seen in a convertible, or dare I say it, a coupe. Or indeed anything with a sunroof.

A true driving pilgrim has to do it tough.

As for how long should you take? From St. Jean Pied de Port to Santiago, you could do it in two days, tops. That’s hammering it. Deal with the speed fines later.

This would though include stopping to check out a few Cathedrals along the way.

You are, after all, on a pilgrimage. 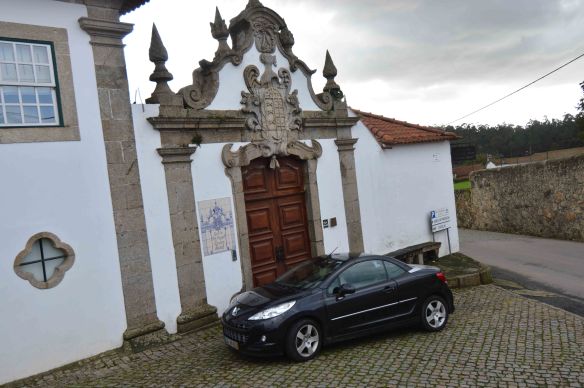 28 thoughts on “The Driving Pilgrim”