Yesterday I posted on Facebook that I had finally locked in dates for my “Front Door” walk, by actually booking airline flights.

My “Front Door” walk is a pilgrimage walk of some 3000kms. I’ll leave out the front door of my house in Mudgee in Central New South Wales, walk about 300kms to Sydney airport, then on Monday 12th of November I’ll fly to London Heathrow, walk from the airport to my place of birth, Wimbledon – from there I’ll walk down to Newhaven on the English coast, cross the channel by ferry, land in Dieppe on the French coast, walk from there to Chatres Cathedral, from there to Orleans in the Loire, from there I’ll drop down to the Veyzelay Camino and walk through to Santiago de Compostela, then to Cape Finisterre. The End of the Earth.

So I’ll walk from my front door to the end of the earth – doesn’t that sound cool?

I’ve booked to come back March1st next year. I estimate it will take me about 4 months, averaging 25kms a day. I want to do what the pilgrims used to do in ages past – walk out their front door and walk to Santiago.

So why did I do that – publicly announce what I intend to do? Usually I don’t talk about things until after I’ve done them.

The legendary bushman, RM Williams, once told me that he lived by the axiom: “To say is to do.”  I never forgot that. And I’ve tried to live by it myself, too.

To say is to do.
Now that I’ve said it, I’ve bloody well got to do it!

But there’s more to it than that, of course.

I’m going through an intense work phase at the moment, and that won’t abate until the end of October. So the walk will be my little reward to myself for these past couple of years of making the film and writing the books.

But the real reason I posted yesterday is that I was excited! After thinking about this walk and planning it for so long, I finally put definite dates on it.

Now in amongst everything else, I have to prepare for it. Which means getting fit again, because after all the recent travel I’ve lost fitness. And it means working out my route in detail, and thinking about what will be in my backpack. I’ll hit France and Spain in January and February – mid winter.

Then there’s my knee. Last I checked I’d run out of cartilage in my knee joint. The orthopaedic surgeon told me to get WD40-type injections. I didn’t. He told me to wear a $1,500 brace every time I walk. I quickly got bored with that.

I should get another MRI before I set off but I’m scared what it might reveal, so I won’t.

It seems like I’m deliberately trying to make this walk as difficult for myself as possible. 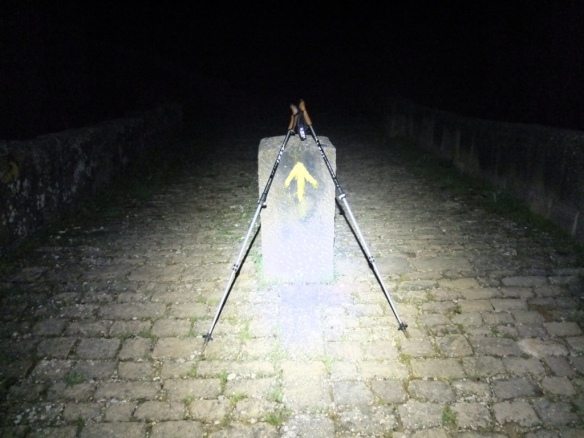