Yesterday was it.
Enough is enough.
I mean, it had gone beyond a joke.

Yesterday I felt compelled finally to document it in a photo, which is below. It’s a none too elegant photo, but it serves as documentary evidence as to what they’ve been doing to me this entire trip – these past four weeks while traveling around the US.

I got a park right in front of where I needed to be.

I had a meeting at 10am on South La Brea, in Los Angeles. Anyone who knows anything about South La Brea at 10am would tell you that street parking is difficult, especially outside one of the coolest coffee shops in the area.

But there it was, straight out front.

I began to laugh about it with Jennifer.

Every time we’d go somewhere, even to a Starbucks on a busy Saturday morning, a car space would be there for me literally right by the front entrance. When every other car space was full.

A few days ago in a crowded 4th of July carpark, where getting an empty spot was near impossible, someone pulled out in the perfect spot, allowing me to slip right in. And it was right by the entrance to the store we needed to go to. It would not have been possible for me to get a closer car space.

So what’s going on here?

In my film, PGS – INTUITION IS YOUR PERSONAL GUIDANCE SYSTEM, there is a short section on the so-called Parking Angel. Lee Carroll, the famous channel for Kryon, says that it’s a heightened intuition which has a bigger overview than you.

As part of the film I went to the Vatican, and I interviewed a high level theologian who “swore” by the parking angel. He said: To get a park in Rome, it requires a miracle, but all I do is ask my parking angel, and I get one.

It’s about setting the intention, asking, and trusting.

This trip though, it’s been ridiculous. I don’t go to Starbucks and set an intention for the best park. I’m more concerned about getting my double-shot tall cappuccino, regular milk,  for Bill, into my energetic system (sadly) as quickly as possible.

They’re giving it to me now, unasked.
Like I said, time and again.
When I park now, I let go. I trust.
And the trust is delivered upon.

I’ve come to realise that when you start to sit comfortably into an intuitive life, as Jennifer and I now do, things become easy. They become light. They become effortless. The fear dissipates. Fear of loss. Of missing out. Like missing out on getting a parking space on a crowded 4th of July holiday morning.

Okay – here’s the thing. And here’s what I think is going on. They are telling me, reminding me, that the energy of finding the perfect parking space so effortlessly can be applied to other aspects of my life.

My work life, my personal life, my family life.
Every aspect of my life.

As Lee Carroll says in my film: People say you’re just lucky. There’s no luck about it. I’m working on my intuition! 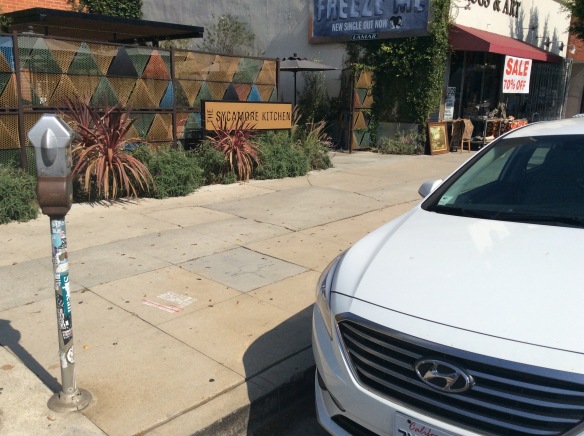