PGS the film.
My film on intuition.
I’ve started back in the editing room with Rishi –

I downed tools nearly four months ago, and as it turned out the break was enormously beneficial. I’ve come back to the film now with absolute clarity as to the story I’m telling, and where the film should position.

The title will be: INTUITION – your Personal Guidance System.

In the four months since I was last editing, a huge amount has happened. I’ve made some big leaps in my understanding of intuition – thanks to a couple of channeling sessions with Amanda Guggenheimer, then reading her books: The Light-Workers Companion and The Channel’s Companion.

As well, I discovered Paul Selig’s books, including the amazing The Book of Mastery, I then began to read his other books, and along with some wonderfully long conversations with Michael Tamura in Mount Shasta, I’ve learned so much these past several months.

I’ve also had some vigorous conversations with skeptics, and also from those supposedly in the field of spiritual awakening – and these parries have sharpened my thinking.

I had a conversation with an academic doing research (and writing a book) on intuition, and I discovered that she had quite a bit of hostility towards me. I found that amusing, because we’re not in competition – the more works out there on intuition the better, is my thinking – but I kind of gathered that she resented a non-qualified person such as my self treading into her territory.

For me it was a very useful conversation though, because in our back-and-forth, it forced me to think quickly about my position on various aspects of intuition – and in my articulating these positions, it helped clarify a lot of my thinking that had up to that point been a bit fuzzy and ungrounded.

Jennifer said that the first stage of editing was me “wrestling with crocodiles.” Well, I can tell you that I’ve now pinned the crocs to the mat (or the riverbank, to keep the analogy), and I’m now guiding my vessel – my film – confidently downstream to its intended destination, which is you guys – the world. 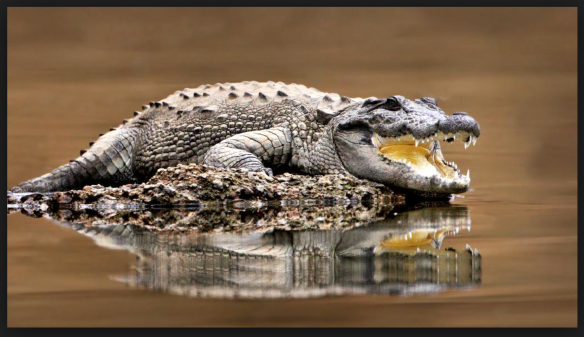 19 thoughts on “No more Wrestling with Crocodiles ~”