Here is the third and last part of Jenny’s guest post on her time as a First Aid nurse on the Camino this past year. She’s left the best for last – Blood Poisoning.

Jenny – it’s been a pleasure and a privilege to host these posts here. Personally, I’ve found them fascinating, as have a lot of others who visit this blog. And I’ve also learned things too. As you know, I also had a bad Compeed experience and would never ever use it again. It nearly derailed my Camino. So thank you for posting here on PGS The Way. You are a wonderful story-teller.

When we saw Jane at Los Arcos, she had begun walking with Kerstin, a Swedish pilgrim.  Jane had recovered well from her blisters, sore knees and the cold – she was really getting into her stride with the Camino – loving every minute of every day.

Kerstin was also going very, very well.  When we said goodbye I told Jane that I felt we would see each other again.  She was skeptical as the legend is that, on the Camino, you only meet the same people twice, and we had seen each other twice.

However, we DID meet up with Jane again, just outside Rabe, a couple of weeks later.  By then we had moved over to the town of Castrojeriz, another spot where pilgrims often sustain injuries.

It was one of those extraordinary Camino coincidences – we were driving out to the main road from the town of Rabe when I thought I saw Jane.  I told David, who asked me if I wanted to turn around and go back to where she was, to make sure.

I debated whether or not we should turn back as we were heading to Burgos on another first aid mission involving the purchase of large quantities of cat food for a feline family we had “adopted” at the campsite (which is a story for another time!).

We did turn back – it was just as well we did – Jane was with Kerstin, who was quite ill.  Kerstin was feeling dizzy and had put it down to lack of water or the heat. She then said she had a blister problem.

The moment David looked at the blister he knew she had to go to hospital. We bundled Jane and Kerstin into the car with us and set off to find a hospital, which we eventually found in a small town about 35 kilometres away.

This is what had us bundle Kerstin (and Jane) into the car in search of a doctor :

Kerstin’s problem began when she put a Compeed patch onto a heel blister. The blister had grown over the days of walking until it burst and forced an edge of the Compeed patch open. Dirt got in and it became infected.

When we saw her she had blood poisoning – her ankle had already started to swell. The doctor in the Casualty Department of the hospital cleaned and treated the wound, gave her an antibiotic injection and horse-pill sized antibiotics and told her that her Camino was over, she had to go home.

The doctor then took David aside and said we had to keep an eye on her overnight and that if her condition deteriorated we must take her immediately to the Emergency Department in the large regional hospital in Burgos – she was really concerned for her. We did keep a close eye on Kerstin and thankfully, her condition improved overnight.

The next afternoon we drove her to Pamplona, a distance of around 250 kms, and put her on a train to Paris, so she could make her way home to Sweden.

As we were driving Kerstin to Pamplona, we decided to pack up the caravan at Castrojeriz and return to Puente la Reina and Albergue Santiago Apostol.

We had a few nights back at the albergue carrying out first aid.  It was the third week of September – the pilgrim numbers had begun to decline and as a result the need for first aid help was not as great, so we decided it was time for our first aid mission to end.

Roni successfully completed her camino and is currently working on her dissertation.

Mike successfully completed his camino and is currently writing an account of his experiences as a bike pilgrim, which he intends to share with members of the Camino Forum.

Kerstin’s foot is now completely healed.  It was six weeks before she was able to walk on it normally.

For me, it was an extraordinary privilege to be able to share the first aid role with David.  Every moment, from start to finish, was wonderful.

The first aid camino was a time of caring for others, of sharing and of laughter, and of nurturing and building upon an already strong friendship.  My Camino and first aid knowledge has increased exponentially because of this experience.  I am so very grateful that David gave me the opportunity to share in the valuable work he does each year.  It was a very, very special time – thank you so very much David.

David had found on his previous first aid missions that the first aid wasn’t just about treating blisters and putting dressings on – many pilgrims were suffering internally.  I found this to be so in helping him – many apparently confident pilgrims burst into tears when we started helping them.

Spending time talking with pilgrims, hearing their stories and providing empathy and understanding was one of the most rewarding aspects of the work. 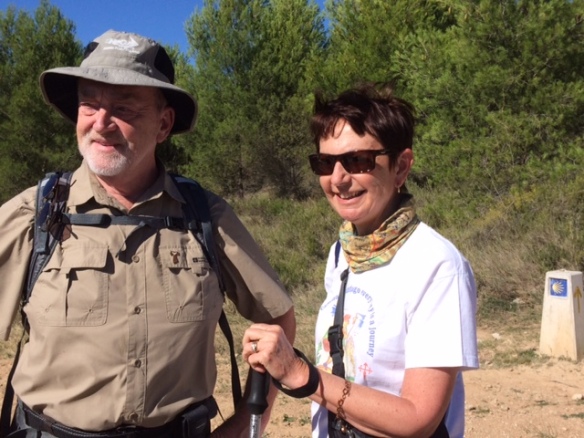