Jenny Heesh yesterday posted her first part of her account of her time on the Camino administering first aid to pilgrims.

Here is the 2nd of the three part series, entitled Blisters.

For those interested in walking the Camino, or for anyone who wants to walk long distances, there is some very handy information in this post.

The day after Mike’s departure David and I began the first aid work in earnest.

Our first stop was at Puente la Reina at Albergue Santiago Apostol.  It is a large albergue – with dormitory accommodation, smaller rooms for those wishing to minimise the sounds of the “snorechestra”, a restaurant, bar, laundry and a pool.

It also has a powered campsite for caravans and motor homes, plus an area for tents.

We had our own albergue on wheels – a two-berth caravan with kitchen and bathroom facilities – which meant we could be self-sufficient wherever we were. 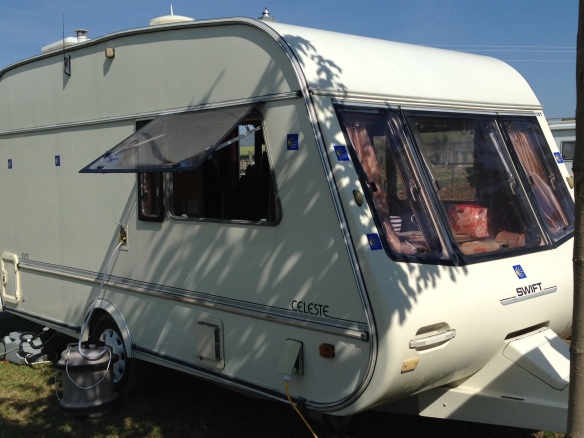 We stayed at Puente la Reina for several days and gradually got into a routine of providing first aid at the albergue from late afternoon and into the evening.  We met many injured pilgrims there – it was a great stop for first aid, being a few days’ walk from St Jean, the starting point of the Camino for many pilgrims, and people were beginning to experience problems.

The first night at the albergue we worked for over four hours straight, treating blisters and handing out first aid supplies.

During the evening we treated an Australian pilgrim, Jane, who had a “trifecta” of first aid problems.  She had blistered feet, sore knees and a bad cold.  David treated the blisters, gave her anti-inflammatory gel for the knees and Olbas oil for her blocked airways.

We met up with Jane again in Los Arcos two days later and she was to become instrumental in the help we gave to a Swedish pilgrim, Kerstin, a couple of weeks later.

During the day we walked into the centre of town and would chat with pilgrims as they passed through.  Often David would open the first aid pack and give out supplies such as band aids etc.  We also drove out to various villages on the Camino in the area to help anyone who needed it.

We found a lot of the problems that pilgrims had could have been prevented.  We saw dozens of pilgrims with blisters which had formed from wearing the wrong sized boots, badly fitting boots, or simply not treating a hot spot as soon as it formed.

Boots were often laced too tightly.  David rearranged the lacing on many pairs of boots – loosening the front section of the laces, with his fist stuffed inside the boot to spread it out, from the front to the third eyelets and then tying a half knot at those eyelets, and finally loosely lacing up the rest of the boot.

He showed pilgrims how to put the boots on correctly.  He told them to kick the heel right back into the boot, tie up firmly so that the rear of the boot is held firmly with the foot, and, with the half knots at those mid eyelets, the front of the boot never tightens up but stays more open, allowing the toes to move freely.

We also found that many pilgrims would lace their boots up tight in the morning and leave them untouched until they finished walking at the end of the day, ignoring the increasing pain – some did not even know that their feet became larger during the day.

David recommended stopping at least every two hours, to take the boots and socks off and have a break, to put their feet up, then put the socks back on alternate feet (so that seam pressure points are moved) – for many this was the end of their daily discomfort or pain.

David always treated the blisters by draining them.  The blisters become larger if they’re not drained.  Firstly, he made sure the foot was clean, after which he used a disposable scalpel to make two tiny V-shaped cuts which allowed the blister to drain completely.

He would then spray antiseptic to get into all the crevices and inside the cut sections, and then covered the blister with fabric plasters.  These adhered much better than waterproof plasters and also allowed the skin to breathe.

The treatment worked really well – almost instant pain relief for most pilgrims he treated.  We also gave pilgrims a supply of plasters to keep them going until they could get to a pharmacy.

We saw many pilgrims with knee problems and shin splints.  The only sure cure for this problem is to stop walking which obviously was not an acceptable option for most pilgrims.  These problems were difficult to treat – all we could do is recommend the RICE method – rest, ice, compression and elevation.

David gave out sample-sized quantities of anti-inflammatory gel and showed pilgrims how to massage the ligaments and tendons gently but deeply to help with pain relief and recovery.  We never handed out pills of any kind – we would always recommend that the pilgrim consulted a pharmacist for oral medications.

We showed pilgrims how to walk with half-length steps, to minimize joint and muscle strain, standing as if they weren’t carrying a backpack and they felt better instantly.  We also stressed the importance of walking at their own pace – not that of their friends, and not to overdo the daily distances – and to use a hiking pole or staff for stability.