I know I said you wouldn’t hear from me for a bit, but I just wanted to tell you about a book I read coming back home from India.

First off, to explain: I always allow my intuition to choose for me what book I’m going to read. I used to go to bookstores, and consider various books until one screamed out:

READ ME, READ ME!

Now, particularly when I’m traveling, I read mostly on Kindle. And so choosing a book involves scrolling through my library of purchases and allowing a book to step forward.

(I very rarely buy a book to read immediately. I buy books that I will read at some stage in the future…)

Just before I boarded the flight from Bombay back to Sydney – 16 hours including transit time – I thought about what sort of book I’d like to read. After 7 weeks of fairly intense work, I figured I’d like to read something light and fun – non-spiritual, non-work related, something well written that I knew would make the flight pass quickly.

I’d recently purchased Salman Rushdie’s new book, TWO YEARS, EIGHT MONTHS, AND TWENTY-EIGHT NIGHTS, which I was very keen to read, as well as Jonathan Franzen’s new book, PURITY. I’ve read all his previous books. Both authors are magnificent writers, and I figured either book would do.

However, when I came to scroll down through my library, I found myself bypassing these two books until I settled on an old arcane book written in 1932 by Alice Bailey, called FROM INTELLECT TO INTUITION.

I’d bought this book after seeing it in a bookstore in Mount Shasta, earlier this year. There was a whole row of Alice Bailey books, and whilst I’d heard of her, I’d never read her. And so later I bought a bunch on Kindle. It was this one particular book that screamed out –

And so I did. And wow – it turned out to be exactly the book I needed to read on that long journey home.

Who is Alice Bailey? She was a very influential writer in the early part of last century. Here’s what Wikipedia says about her –

Alice Ann Bailey (1880 – 1949) was a writer of more than twenty-four books on theosophical subjects, and was one of the first writers to use the term New Age.

Bailey’s works, written between 1919 and 1949, describe a wide-ranging system of esoteric thought covering such topics as how spirituality relates to the solar system, meditation, healing, spiritual psychology, the destiny of nations, and prescriptions for society in general.

She described the majority of her work as having been telepathically dictated to her by a Master of Wisdom, initially referred to only as “the Tibetan” or by the initials “D.K.”, later identified as Djwal Khul.

Her writings were of the same nature as those of Madame Blavatsky and are known as the Ageless Wisdom Teachings.

She wrote about religious themes, including Christianity, though her writings are fundamentally different from many aspects of Christianity and of other orthodox religions. Her vision of a unified society includes a global “spirit of religion” different from traditional religious forms.

The book is esoteric, very intellectual, and dense. But full of extraordinary wisdom. It’s written in a very scholarly way and is well researched, citing references from core spiritual texts.

One of the early chapters is on education. She discusses the differences between Eastern and Western education, and summarises thus:

Firstly, in the Eastern system it is assumed that within every human form dwells an entity, a being, called the self or soul. Secondly, this self uses the form of the human being as its instrument or means of expression, and through the sum total of the mental and emotional states will eventually manifest itself, utilising the physical body as its functioning mechanism on the physical plane. Finally, the control of these means of expression is brought about under the Law of Rebirth.

Through the evolutionary process (carried forward through many lives in a physical body) the self gradually builds a fit instrument through which to manifest, and learns to master it. Thus the self, or soul, becomes truly creative and self-conscious in the highest sense and active in its environment, manifesting its true nature perfectly.

Eventually it gains complete liberation from form, from the thralldom of the desire nature, and the domination of the intellect. This final emancipation, and consequent transfer of the centre of consciousness from the human to the spiritual kingdom, is hastened and nurtured by a specialised education, called the meditation process.

In the west, she says, the emphasis is entirely reversed.

First, there is an entity called the human being, who possesses a mind, a set of emotions, and a response apparatus through which he is brought into contact with his environment. Second, according to the calibre of his apparatus and the condition of his mind, plus the nature of his environing circumstances, so will be his character and disposition.

The goal of the educational process, applied wholesale and indiscriminately, is to make him physically fit, mentally alert, to provide a trained memory, controlled reactions, and a character which makes him a social asset and a contributing factor in the body economic.

His mind is regarded as a storehouse for imparted facts, and the training given every child is intended to make him a useful member of society, self-supporting and decent. The product of these premises is the reverse of the Eastern.

She goes on to say:

The contrast between the two might be crudely summed up as follows:

She concludes by saying something that now seems so obvious, and yet it hit me with enormous impact –

The Eastern method is the only one which has produced the Founders of all the world religions, for all are Asiatic in origin.

When you think about it – Christianity, Hinduism, Buddhism, Taoism, Islam, Confucianism – all come from the Eastern / Asiatic method of education. The western way has given us science and art and philosophy and commerce, but not the spiritual. 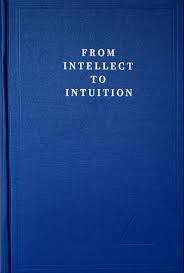