We flew into Varanasi this afternoon –

My PGS told me we should go there, that it would be important for the film – but I didn’t really know why.

At Delhi airport I was directed by my PGS to buy a book called Benares – City of Light.  It’s a very readable an academic account of Varanasi, which used to be called Benares.

I was reading this book on the plane, and on touchdown in Varanasi I read the last sentence of the chapter I was on – and it said that Benares is regarded by the Hindus as being the embodiment of the sixth chakra, which is the Ajna Chakra – which links to the Third Eye.

The Third Eye is integral to intuition. Essentially, I’d come to the most important place on the planet for intuition.

There’s a lot I will tell you about this fascinating place – that it’s the home of Shiva, that it exists above the earthly plane, that it’s the crossover place for the dead – but it’s late now and I’ll just quickly run through today’s essentials, and tell you more in the coming days…

I’d booked a cheap guest house that faces the Ganges – but I didn’t realise it’s impossible to get a vehicle close to the places by the river. That meant we had to park about 10 minutes walk away, and some young fellas from the hotel came and carried our bags through the chaos of the old part of town.

Jennifer glided along with her usual stately calm…

We finally got to the hotel, dropped our bags off, and went for a walk – and soon found a sadhu who looked like he’d been plucked from Central Casting. 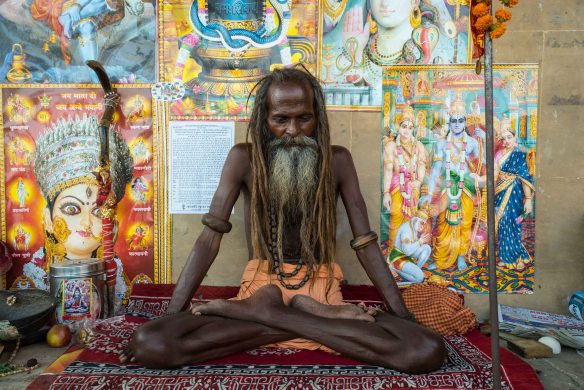 But he was the real deal.
So we filmed him.

He didn’t mind – and when I offered him money when we’d finished he refused to take it.

We then walked along by the Ghats – the stairs that run down to the river – and ended up in a cafe atop a hotel that had a breathtaking view of the sacred river.

We snacked on a plate of Tandoori mixed vegetables.
Spicy!
Beautiful! 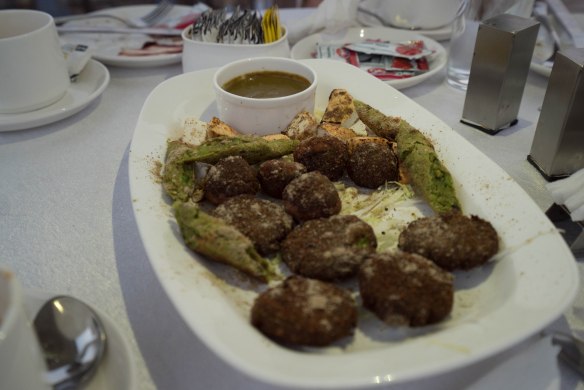 Tomorrow we’re getting up before dawn to shoot.

This is a special place.
The embodiment of the Sixth Chakra…