Today was all about the interview with the Prince.

We had been advised that it was royal protocol to wear traditional dress in the presence of the Prince, and so we went down to a local clothing store and got kitted up.

Pieter and I decided to go classic black, Ninja-style –

We had all the gear, but no boots. So Piet wore his black RMs and I wore my old Scarpas.

The Royal Palace was not one big building, like Buckingham Palace or The White House, which is probably the closest thing America has to a palace, if you exclude the New York Stock Exchange or Trump Towers. The Palace was a series of beautiful buildings surrounded by their own gardens. 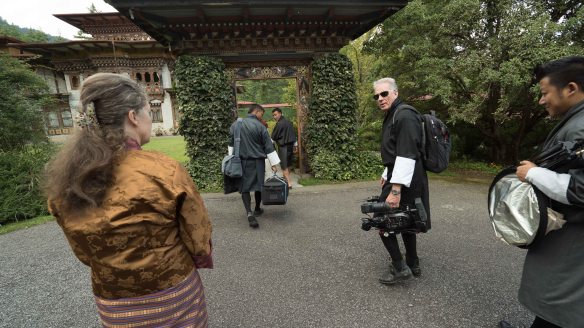 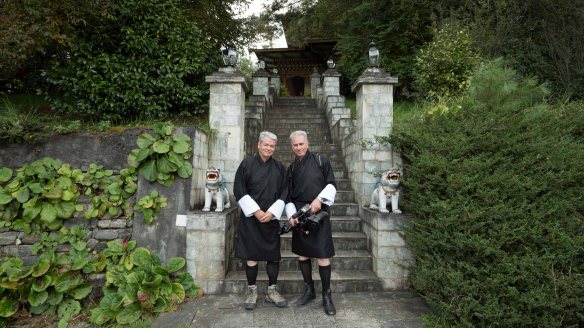 We were given a small building just down from the Queen’s Palace, which had a stream of water flowing through. It was perfect for the interview, and Pieter and I quickly began to set up.

We then got word that His Royal Highness was approaching, so we were ushered out to meet him. We waited on a path near the Palace, and as he walked towards us he struck me as looking like a Bhutanese Johnny Depp – small and delicate in features, cultured face, beautiful smile. A handsome young man aged thirty one.

When he introduced himself, surrounded by bodyguards and entourage, he came across as humble, caring, and just a really nice young man.

He thanked us for taking the trouble to wear the country’s national costume. All the frocking up had been worth it!

I’m sorry that I can’t show you pictures of HRH (His Royal Highness) at the moment – we have to get Royal Approval from the Palace Media Office before we can do that.

Here though is a rearview of our interview set-up…

We then walked back into the garden outbuilding and began the interview.

It was a cracker.

His Royal Highness was wise beyond his years, and it wasn’t an interview so much as a very engaging conversation with an exceedingly smart young man. And again, his humility came across very powerfully.

Without even reviewing the footage I know that this interview will feature prominently in the film. It was worth coming to Bhutan just for this –

The Prince, Oxford educated, spoke about intuition both from a scientific / Jungian perspective, but also he spoke eloquently about the Buddhists’ beliefs in intuition.

As soon as we get Royal Approval, we’ll post some shots of this handsome young man. In the meantime, you’ll just have to put up with a shot of two ugly old men…