(This post is only halfway done – and it’s late, because the internet at the hotel in Dharamsala is not working sufficiently well for me to post photos… sorry!)

Today we ventured outside of Dharamsala –

Firstly, we visited the Library of Tibetan Works and Archives, which includes a museum of Tibetan religious artefacts and works of cultural significance.

Some of us walked down the long steep hill to the library.

Marie wanted to buy an umbrella from a Buddhist monk, who didn’t want to sell it to her because he said it was old and broken. Marie was insistent, not because it was likely to rain (it never rains on my tour! 🙂 ) but because she wanted it as a walking stick.

She offered him five hundred rupees (Rs500), for the umbrella, which you could probably buy in a market for Rs100. The monk didn’t want to take that much money, insisting that it was old and broken. But Marie was insistent. And those that know Marie know that when she is insistent, she gets what she wants! 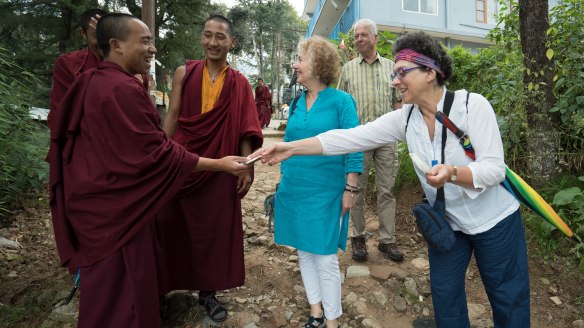 She bought the umbrella, for Rs500, telling the monk that it was a donation to the community. Five minutes later, she tried to open the umbrella and it broke. Which delighted her because she could then strip the umbrella part off and use the stem as her walking stick! 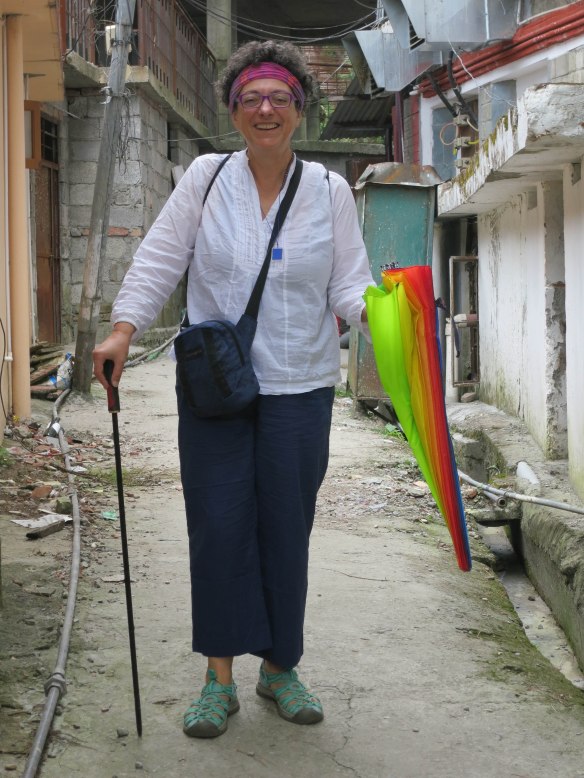 We had previously filmed at the Library last year, and luckily the monk in charge remembered me, so he opened up the Archive stack which contains all the scriptures and religious and philosophical writings – some of which date back more than two thousand years.

He kindly opened up a manuscript that was 1700 years old. These scriptures were sneaked out of Tibet after the Chinese invasion in 1959. The Chinese were determined to destroy all things religious – and tragically they destroyed Buddhist monuments and temples that had stood for many centuries. 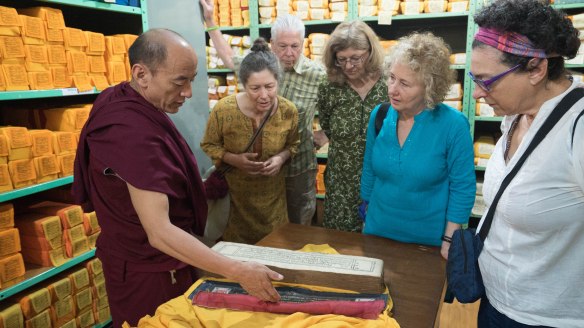 Upstairs from the stacks there’s the museum, which houses items of cultural significance that were smuggled out by monks during the invasion, and carried across the Himalayas in secret to Dharamsala.

In the afternoon we went to a Buddhist Temple out of Dharamsala – the magnificent Gyuto Karmapa Temple.

Janet found it to be a place for contemplation – 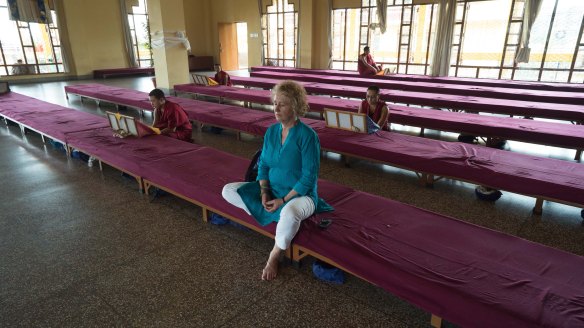 So too Marie & Jennifer – 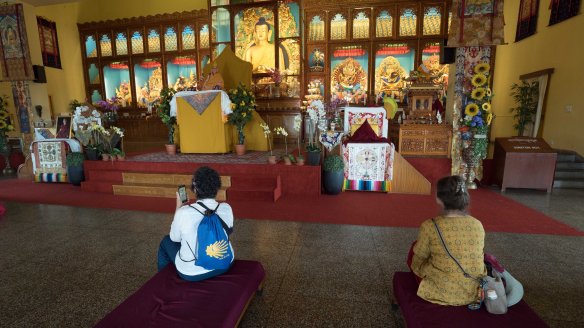 Later we went to another temple, which is also a showcase for Tibetan Arts & Crafts – the Norbulinka Temple complex..

Tomorrow we have a “free” day – a day just to wander around Dharamsala, do some shopping. go back to the Dalai Lama Temple, and just allow time to absorb all that we’ve experienced so far.

The tour tomorrow will be half way through, and already it’s been quite amazing, and very affecting for some of our guests. But there’s more to come!!