Today was a big travel day.

We left the hotel in Portland before 5am, and caught a flight at 7 to Chicago. There we waited for 3 hrs for a flight to Buffalo, where we picked up a van and drove two hrs to Toronto. We got in after 11pm.

Why not fly straight from Portland to Toronto you might ask?

Money.
It was cheaper this way.
We can’t afford direct flights on this budget!

During the flight I finished John Geiger’s book – THE ANGEL EFFECT.
It’s an incredibly powerful book.

John details instances, both contemporary and historical, where people have literally been touched by an angel.

Most of these people did not hold religious beliefs, but the majority of them tell of their experience with a sense of awe – and a belief that it really was their Guardian Angel that stepped up to help them.

It’s a terrific book – beautifully researched and written – and if you’rre interested in this stuff you really should read it. Read it even if you aren’t interested, because it might make you consider the world a little differently.

John was formerly a highly respected journalist, and now he’s an academic at Toronto University, and Governor of the Royal Canadian Geographical Society.

He writes from an objective secular viewpoint, and includes many interviews with neuroscientists, psychologists, and researchers who provide plausible rational explanations for these phenomena.

However, as John says in his book, science can’t answer all the questions that arise from these first hand accounts.

The overwhelming conclusion that you have once you’ve read the book is that there is more unknown than is known. And those that believe in angels – those that have had first hand experiences with these incorporeal spiritual beings – have as much right to say they exist as scientists have to say that they don’t, and it’s all a function of the brain under stress.

I’m interviewing John tomorrow for my film on intuition, and he promises to make a fascinating contribution.

On the drive from Buffalo up to Toronto we stopped in at Niagara Falls – right on our route. None of us had been to Niagara Falls before, and so we had to drop in for a quickie selfie.

Just as I never expected Uluru to impact me as powerfully as it did, nor did I expect Niagara Falls to make an impression. I’d always thought it as being a bit tacky and down-at-heel – like the back blocks of Las Vegas.

But i found the energy that came up from the tumult of water – the prana in the air – was almost so thick you could grab it and swallow it whole.

I stood back and soaked in this prana – and wondered at how extraordinary it must have been before the arrival of white settlement – what this must have meant spiritually to the Native Americans. What myths and legends they must have created.

Carparks have replaced woods, and ugly buildings – mainly casinos – crowd the skyline, and concrete walkways jut out over the falls. But none of this unfortunate aesthetic can take away from the prana that exists independent of all that.

We could only spare a short visit, and so I quickly tried to find some interesting shots which weren’t the usual touristique shots you take when you go to one of the great Wonders of the World.

Here are my attempts: 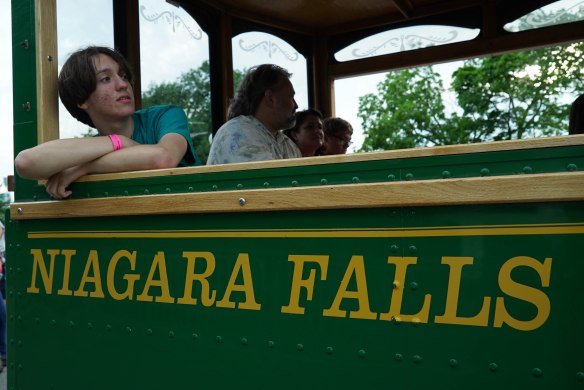 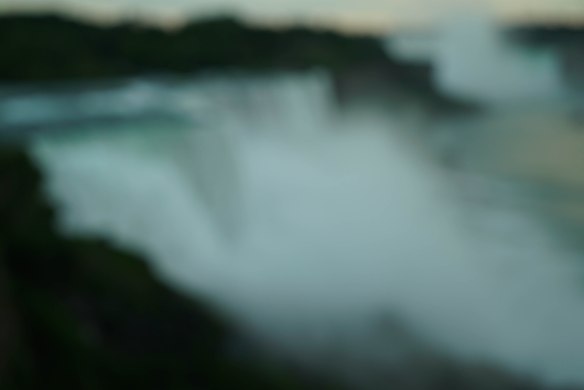