Big time.
All the time.

He prefers not to be called a psychic because he says we’re all psychics. He says we’re all born with psychic abilities, but these get crushed out of us by our parents, our teachers, by our friends, and by life itself.

James Van Praagh is a best selling author, a tv producer, and the creator of the tv series THE GHOST WHISPERER.

He’s pulled away from tv though, even though he could make a lot of money from it, but he believes that tv always tries to sensationalise what he does. He’s not interested in that, no matter what big fat cheque is waved under his nose.

James is from Queens originally, and he has that no-nonsense down-to-earth approach to his work, and to life generally. He doesn’t believe he’s special – he says anyone could, if they were prepared to put in the commitment and work, do what he does – communicate with those on the other side.

James sees himself not as a a medium though necessarily, but as a spiritualist – a person on an intense spiritual journey.

Today he gave me a stellar interview.

We talked for about 75 minutes, and because he’s such a gifted orator and he’s used to the medium of film, he gave me answers that were eminently useable for the film.

He firmly believes that if a person wishes to advance their intuitive abilities, it means going on a soul journey. Because intuition, he says, is the voice of the soul.

He also, by the way, firmly believes in the concept of PGS – that intuition is a guidance system like a GPS in a car – and that the film will have a big impact.

Later, after the interview, he gave us all a signed copy of his latest book – ADVENTURES OF THE SOUL – and a box of soul cards. He was generous with these gifts, with his time, and with helping me try to line up the next round of interviewees.

As we left today he helped guide our large vehicle down the driveway.

He mimicked being a flight controller on the deck of an aircraft carrier. Very funny. He looked like the man you would least suspect of being one of the world’s great mediums. 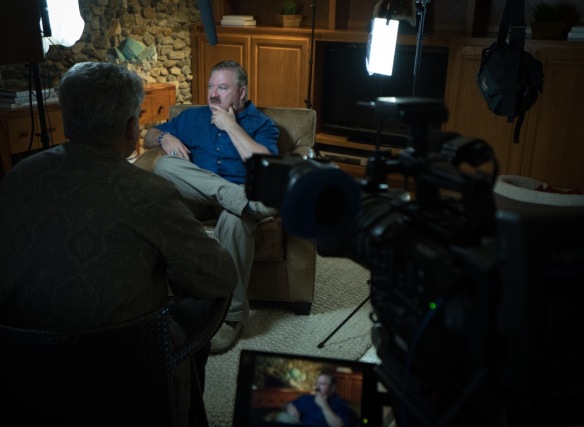