It’s coming on midnight and so I will make this brief.

Also, I am in the mountains north of Assisi now, and Internet is sketchy. So I can’t post any of the photos I took today. I will have to do that later.

Today was another hard slog. We climbed a total of 900m, and descended a total of 650m. Perhaps the biggest toughest climb was right at the end of the day, to reach our hotel.

We are now at Tenuta Di Bascina – only about 30kms from Assisi.

We are having enormous fun – Ken and I had Patty going about Drop Bears this evening. You know, the vampire koalas that drop from gumtrees and attack you with their fangs.

I showed her a bunch of scary images of fanged koalas from Google Images.

Highlights were stopping in the original 12th century chapel on the outskirts of Gubbio where St,Francis is said to have placated a rogue man eating wolf. The chapel was magnificent.

Another highlight was having fresh home made pasta from an Agriturismo for lunch. Oh yes and Grappa in our coffee.

And the Ladies of Leisure making it up a mountainside that nearly killed the rest of us. The girls walked a long way today, through some very tough mountain country. They’re a strong bunch, and getting stronger each day, with their Proseccos and now their firewater infused coffees. 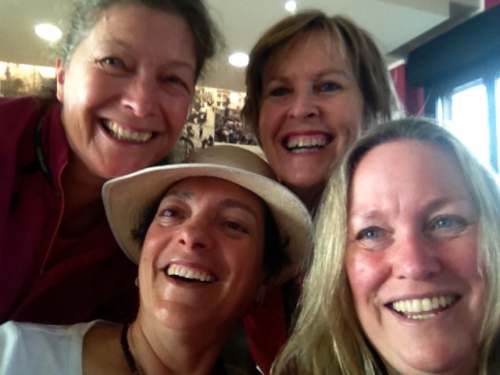 I’ll have to post photos tomorrow – but in the meantime, here is a shot I took while walking to dinner tonight. We’re staying in a very remote Albergo, with a family run kitchen in an adjoining farmhouse.

5 thoughts on “Assisi d10 / Deeper into the mountains”