Julian is now two thirds of the way through his mammoth pilgrimage. It’s been very tough for him at times – what with theft, sunstroke, recurring illness, and the disappointment he’s faced several times with the changing nature of The Way.

You may not always agree with Julian, but I personally feel privileged to be able to post his observations on this blog – because he walked his first Camino before most of us had even heard of it. He really is the true pilgrim, in action and in spirit.

This is a very different Camino, even though it’s also more of the same.

An unexpected belly illness has been eating into both my body and my budget for several weeks, though I think it’s now getting under control, but some un-pilgrim has also stolen my telephone, and the French “social” “services” seem to have decided to leave me close to penniless for my second half of theWay.

The pennilessness has now happened Every Single Pilgrimage, no matter what I try and do to prevent it, though this is the first time I’ve needed to start begging. The loss of the ‘phone is a litle different, because even though it makes my contact with the world beyond the Camino much harder, it is also bringing me back closer into what the Camino actually should be — similar to the penniless, really.

The un-pilgrims are harder to deal with — not those in the process of learning, though talking with them remains difficult until they get their heads ’round the Camino a bit more ; but the massive numbers of Tourigrinos and, well, … just hikers who have not even the faintest idea of how to even commence a Pilgrimage and yet do all that they can to monopolise all of the facilities for their own very un-spiritual needs.

Ten years ago, the 5AM crowd were easy to locate and avoid ; they travelled in little groups, and one could simply move on to the next pueblo. Less said about the 4AM people, the better.

In 2014, I am typically the ONLY person remaining in the Refugio when dawn breaks, and I am immensely saddened by this crowd of hikers who never let themselves be woken by the natural Grace and Beauty of the pre-Dawn Light upon their eyelids, nor experience the natural rest of a Dusk ’til Dawn sleep.

They hike, and do not seek. 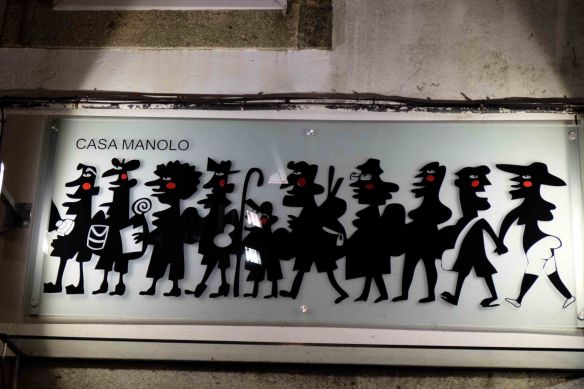