I'm sitting in a little cafe on a hill overlooking the Ganges.

Outside there's a constant stream of women climbing the steep path, dressed in brightly colours saris.

I'm with Jennifer and were about to have a simple lunch of vegetable pakoras – they're like fried patties, but spicy – and dhal and roti. 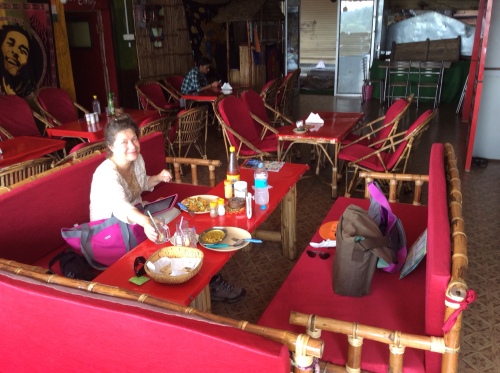 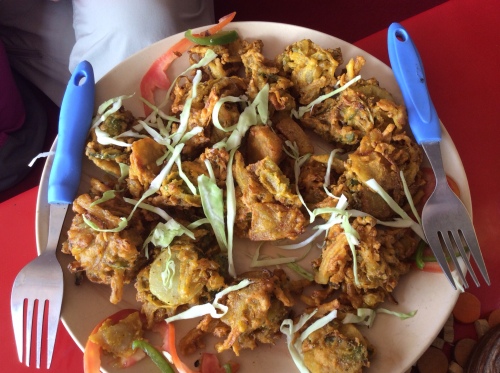 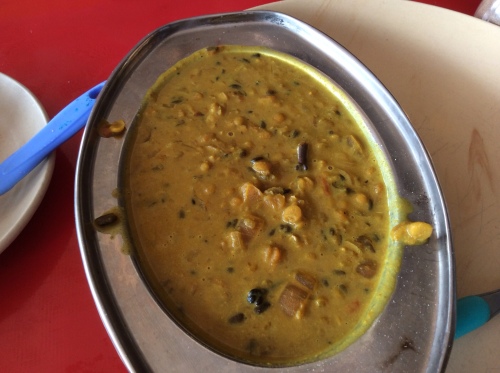 To drink it's a typical Indian fresh soda lime, sweet and salty. This is lime juice mixed with soda water, containing both sugar and salt.

For some inexplicable reason it's not only unnaturally refreshing, it also seems to represent the unlikely contradictions that are modern India.

You have to have patience in India. There's a lot of waiting for reasons that often defy logic.

For instance, you'll order a bottle of water and then have to wait 15 minutes for it to come, but there'll be no glasses. You have ask for the glasses separately, which means a further wait of fifteen minutes.

Right at the moment I've been sitting here for thirty minutes and the pakoras still haven't come. And there's just two other people in the cafe, so the kitchen is hardly over worked.

But hey, it's pleasant, we have a lovely view of the Ganges, there's an exotic smell of sandalwood wafting up through the trees, and I am after all a pilgrim. And pilgrims don't yell at kitchen staff to hurry up.

This morning I did one of the best interviews so far. He's a young swami from Haridwar – a former high flying investment banker originally working out of London and Singapore.

But one night he had a vision of himself in a hall before a guru, and then by chance some years later he saw a poster in the London underground, advertising a visit of a spiritual leader from India. It was that guru he saw in his vision.

He followed this guru back to Bangalore in Southern India, and decided to throw in his world of high finance and become a sadhu – a holy man.

Today he was able to speak about intuition with the wisdom of the east, but the knowledge and pragmatism of the west. He was smart, articulate, and reinforced beautifully my concept of a personal guidance system.

It was, in my parlance, a cracker interview.

Tomorrow we shift out of our “colourful” hotel and into the Sawmiji's ashram. That should be fascinating…