What I didn’t put in my post yesterday about Mount Shasta are some of the legends that fall into my Weird and Whacky category.

Perhaps the most prominent of the W&W are the stories involving the Lemurians. You don’t know what Lemurians are? Well, this is what they’re claimed to be:

(CAUTION – DON’T READ THIS IF YOU ARE ON MEDICATION, OR WHILE DRIVING)

The Lemurian Age took place approximately between the years 4,500,000 BC to about 12,000 years ago. The Lemurian race was a mixture of beings that came mainly from Sirius, Alpha Centauri and a smaller number of them from other planets as well.

Before the fall in consciousness, the Lemurians lived in a fifth dimensional frequency or dimension, and were able to switch back and forth from fifth to third dimension at will, without any problem. It could be done whenever it was desired, by intension and the energies of the heart.

Lemuria was really the cradle of civilization on this planet, the “Motherland” who assisted in the eventual birth of many other civilizations. Atlantis came about at a later time. Both were  lost under the rising sea. 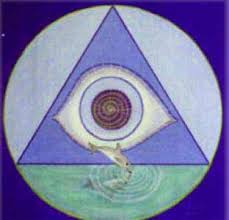 In 1894, Frederick Spencer Oliver published A Dweller on Two Planets, which claimed that survivors from a sunken continent called Lemuria were living in or on Mount Shasta in northern California. Oliver claimed the Lemurians lived in a complex of tunnels beneath the mountain and occasionally were seen walking the surface dressed in white robes.

This belief has since been repeated by Guy Warren Ballard, followers of the Ascended Masters and the Great White Brotherhood, and Bridge to Freedom, The Summit Lighthouse, Church Universal and Triumphant, and Kryon.

Here is an overview of Mount Shasta from the W&W perspective: 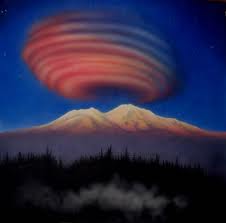 Mount Shasta is a very special place to say the least; it represents much more than just a mere mountain. Mount Shasta can be considered as one of the most sacred places on this planet.

The mountain is a mystic power source for this planet; actually, this sacred mountain is an incarnation of the Great Central Sun of this universe. It is a focus for angels, spirit-guides, spaceships, masters from the Light Realm, and the home of the survivors of Ancient Lemuria, which sank under the waves of the Pacific Ocean a little over 12,000 years ago.

For those gifted with clairvoyant abilities, Mount Shasta is embraced in a gigantic, etheric purple pyramid whose capstone reaches far beyond this planet into space, and connects us intergalactically to the Confederation of Planets for this sector of the Milky Way Galaxy. 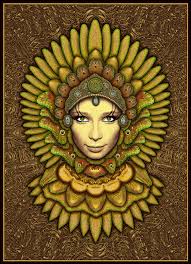 This awesome pyramid is also created as an inverted version of itself, reaching far down to the very core of the Earth. You can call Mount Shasta the entry point of the Light-Grids of this planet, where most of the energy comes first from the galactic and universal core before it is disseminated to other mountains and into the grids. Most mountaintops, especially tall mountains, are Beacons of Light, feeding the light-grids of this planet. 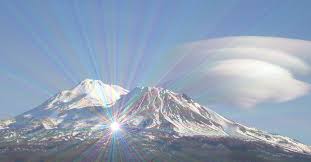 Strange lights and sounds are often seen or heard on the mountain. Lenticular clouds, shadows and outstanding sunsets add to the mystical aura of the mountain. Several tunnels stretch far into the interior of this majestic mountain.

Mount Shasta is also the home of the present-day Lemurians, survivors of the sinking of the continent of Lemuria over 12,000 years ago. Yes, our Lemurian brothers and sisters are real; they are well and physically alive, living in the subterranean city of “Telos” underneath sacred Mount Shasta. 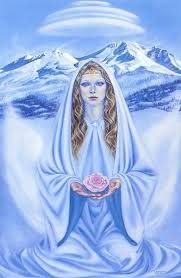 I don’t often put Weird & Whacky stuff up on this blog. Neither Jennifer nor I necessarily believe in this stuff, but as Hamlet once famously said: There are more things in heaven and earth, Horatio, than are dreamt of in your philosophy.