I have had very intermittent internet access since leaving Spain and Portugal. This was meant to be posted quite a while ago…

This is an overview of a week spent driving from Porto through to Santiago de Compostela – following the northern section of the Camino Portuguese.

Our trip was to scout a tour we’ll be leading next April. Our purpose was to find suitable hotels, begin to negotiate rates, find wonderful restaurants and cafes – and generally try to get a sense of what it will be like to walk the pilgrimage route.

At first I tried to follow all the yellow arrows in the car, but I found it just wasn’t possible when the Camino went off road and down trails.

Here are the things I found from the scout:

Our journey started, as per the Brierely Guide, on a metro train heading out of the Porto City Centre to the outer suburb of Matosinhos. It’s by the port, where the fisherman land their daily catches, and it has the best fish restaurants in all of Porto.

My wife and I followed the very first yellow arrow out of the port area and then along the coast, by a huge lighthouse – heading up to Vila do Condes, about 20kms to the north.

The town’s market was in full swing when we arrived, and we wandered through, before finding out way down to the river. 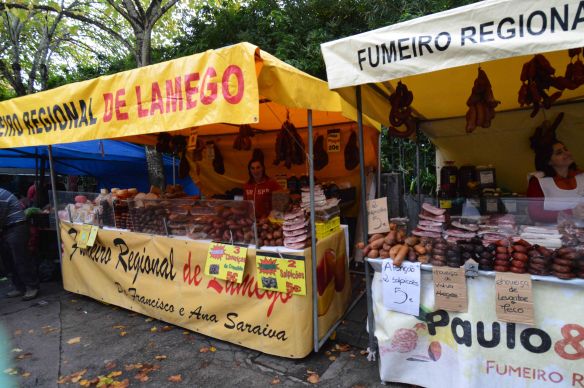 A tendril of smoke caught my attention and as I walked closer I saw a man grilling pork ribs on a barbecue outside a restaurant. It was lunch, so Jennifer and I went inside and ordered… yes, the grilled ribs. They were truly delicious.

The next day we went through to Barcelos – famous for its chickens, and arguably the home of the world renown Portuguese Grilled Chicken. We now know the best place in town to have this local delicacy.

Nearby is Braga and Bom Jesus, which is just out of the town. We didn’t go there this trip – we’d been there earlier this year, and it’s very apparent why it’s the most popular tourist destination in all of Portugal.

The church, on a hill overlooking Braga, sits atop a series of ornate switchbacks., with little chapels at each end. Magnificent.

The next main spot for us to stop was Ponte de Lima – some say the jewel in the Camino Portuguese crown. It’s a gorgeous little picturesque town with a large Roman Bridge leading north.

We headed further north, through Valenca which is on the Portuguese / Spanish border, then crossed over into Spain and spent the night at the Parador in Tui – which looks across the river at Valenca.

The Parador was a big mistake. It’s a fair way out of town, expensive for what you get, and the service is ho-hum. We found better hotels in the Tui township, close to the magnificent Cathedral high on a ridge overlooking the town.

We made our way to Pontevedra – a large town with a very beautiful historic centre. The Camino cuts all the way through it, and crosses a bridge to the north. My wife and I followed the yellow arrows which finally led us out of town.

From Pontevedra we made our way to Caldas de Reis – a very old and elegant spa town with hotels that date back several centuries. 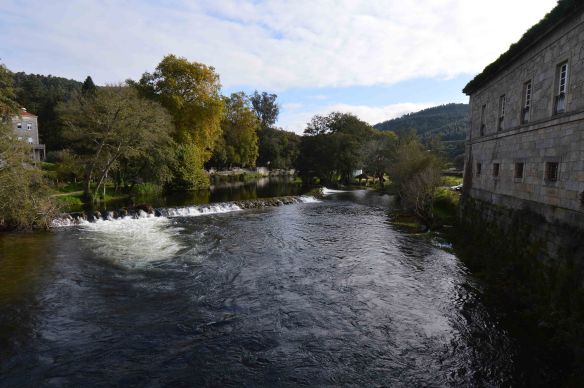 From there we went through to Santiago where we booked into the Costa Vella hotel. I went immediately to the Cathedral, but was disappointed to see that the front facade was covered in scaffolding. Obviously it was undergoing a facelift during the winter months.

I made my way inside, and sat in the pews and remembered the last time I sat there – having just finished the Camino Frances.

Later I met up with Ivar, who runs the Camino Forum – we had a great chat – lovely guy.

Scouting the Camino Portuguese as I’d done only made me more aware of how pilgrims  for centuries have made the pilgrimage from all over Europe – Portugal, Italy, Germany, even as far away as Russia -, forging their own “Ways” to come to this very special place – Santiago de Compostela.

24 thoughts on “An overview of the Camino Portuguese…”