As many of you might know, the bushland behind Sydney is currently ablaze.

We’re being told it’s the worst bushfires in nearly 50 years. Certainly there have been a lot of houses lost, tragically – although thankfully I’m not aware of any loss of life.

Jennifer and I live in Mudgee, about 300kms NW of Sydney. We’re not under threat. We’re about 100kms from the nearest blaze.

The media here are beating up the story. Tomorrow is evidently going to be “catastrophic.” They’re expecting high temperatures, raging winds, and the various fire-fronts to join and create a “mega-fire” which could sweep through Sydney’s outlying suburbs.

I suspect none of that will happen.

As a former journalist, I’m well aware how the media creates stories that are intended to incite fear. The Rural Fire Services and the various emergency services help create this fear, to make us all more compliant.

The trouble is that when you cry wolf, as the media has done on so many other occasions, no-one believes the reports when they are genuine, and when life and property could be in very real danger.

Tonight I was watching the news. They played CCTV footage of some kids stealing donation boxes from stores in the Blue Mountains – the affected area. People have been very generous in donating cash, which they have put into these boxes on the front counters of various stores. These young men stole a box which contained about $300.

However the tv news report played up their ethnic background, thus implying it was “not Australian,” and hence inciting racial hatred.

That was also not very charitable.

People have been incredibly caring and compassionate during this difficult period – donating everything from cash to food to bedding to furniture – intended for those who have lost their houses and belongings.

And those fighting the fires are extraordinary people. Many of them are volunteers. They are working incredible hours and putting their lives at risk to save property and keep the fires under control.

Today, many more firefighters came from interstate to tackle what might be an horrific few days coming up. I hope not. Embers from the blazes are known to travel 50km-70km and start spot fires in unaffected areas.

Under the right conditions, these bushfires can travel fast, and be truly lethal.

The day after tomorrow I have to drive down to Sydney, through these bushfire areas, to attend a doctor’s appointment – my neurologist – to check on the numbness in my left foot. This numbness appeared during the Camino, and has stayed with me since, although now it’s fading.

I hope that I can get through on Thursday. I will have to drive through the heart of the main bushfire area. Given the geography of the area, there’s no other way to get to Sydney. It’s the only road. 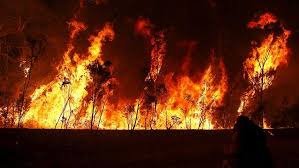