Here is his wonderful response –

(the sections in bold italics are my previous responses to him…)

No, that’s not at all what I wanted to suggest.

(and BTW I wouldn’t agree with that dictionary definition either)

Cognition has multiple aspects, and I’d think that rigour and rationality belong to methodology not intellect, scholarship and learning to education not intellect.

The distinction I was thinking of is more one of focus, rather than capability. We’re also getting back into that area that my long post of some weeks back was addressing, the one you never saw that got destroyed by WordPress.

But I think that wherever one’s own focus might be, it would be a mistake to neglect the other — and it’s that kind of neglect that leads to that sort of bad dictionary definition, or to religion without spirituality.

Again though, it comes down to definitions. I define religion as an organisational structure for those that adhere to a particular set of beliefs about the cause, nature, and purpose of their existence.

I very much disagree. 😉

That definition is more appropriate to a sect of Philosophy, or a political organisation, and I don’t see that there’s anything uniquely religious about its contents.

Atheists often view religion as being nothing more than that, but as we’ve agreed, religion is meaningless without spirituality, and there’s nothing pertaining to spirituality in that definition, which is therefore wrong, or at the very least incomplete.

I’d argue that a religion is an organisational structure for those that adhere to, and practice, a particular form of spirituality.

Not every religion is going to be strongly productive of doctrines and moral imperatives, but even so, these too are either centred on spirituality or they’re meaningless.

Religion is intellective, in my view, because it is the organisation of the spiritual into a persistent, community form — to continue the parallel with the Camino, pilgrims tend to all follow along the same path, instead of dispersing each person along his own individual route.

If spirituality is intuitive, then, it is in the individuality of experience and action, whether in or out of community — but we are not alone, and the spiritual community of religion is precious, and not opposed to it. 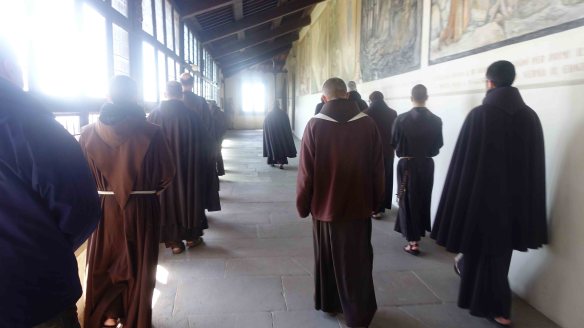