I nuked a frypan.

I left it on the stove and went off to handle some emails. Next I hear Jennifer calling out from upstairs: Is something burning?

The frypan was burning so much that it had welded itself to the hotplate. It wasn’t burning, it was melting. I couldn’t physically pull it off the stove. I had to turn off the hotplate, wait till it cooled down, then jemmy it free.

Jennifer put it into the garbage bin – she said it had turned toxic, and couldn’t be used anymore. 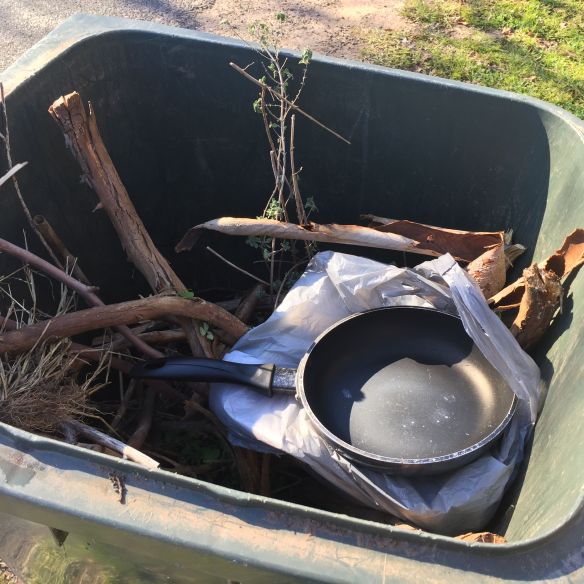 Next, she asked me to make her some toast while she went out into the garden to plant snap dragons.

So I put on some toast.

When the toaster popped I wasn’t happy with the result – the toast wasn’t crispy enough. It needed a bit more heat. So I  put it on again – figuring I’d pop it part way through the cycle and it would be perfect.

Then I went off to handle a few more emails…

It hasn’t been a good morning for me. I’ve been anxious about this trip coming up. Usually I head off on a filming trip with great excitement. This time I’m anxious.

Later if I have time I’ll give you more detail on these people – but suffice to say they are “headline acts” when it comes to intuition. And I want to make sure this next phase of the filming goes well, because it will constitute the core of the film.

Over the last couple of days I’ve been packing, but I haven’t been able to find my favourite summer jacket.

It’s a smokey blue jacket, which I bought in Rome last year for €90. I bought it for filming around The Vatican –

I have other jackets that I could take.
I have a nice brown jacket.
But I wanted to take the blue one.

So this morning, after the nuked frypan and the nuked toast, Jennifer sat me down in our front sun room, and talked me through what was happening.

She told me my emotional body was running amok – and she was right.

Actually no, she was wrong. It wasn’t running amok – it was running like a burning man consumed by flames racing from room to room, screaming, looking for a fire extinguisher.

Anyway, she was right. I told her about my anxiety, and she said that my emotional body was like a monster with a giant hammer pounding into dust all the good work I’ve been doing to strengthen my spiritual body.

She said I had tools at my disposal – tools I knew how to use: yoga; meditation; even stopping for half an hour to sit in the sun and contemplate.

She said I could also allow myself to be drawn to a book, open it up at any page, and read – trusting that what I would read would be of help.

In other words, allow my Personal Guidance System to do its job.

I said yes, I could do all that. And in fact I did 40 minutes of yoga this morning, I did 30 minutes of meditation last night, I’ve been reading Dr. Norman Shealy’s book on Intuitive Medicine, which is extraordinary – but…

Jennifer sighed, knowing that I was indeed the burning man, still consumed by flames, running from room to room, screaming, looking for a blue jacket.

(The blue jacket being my fire extinguisher.)

Where have you looked? she asked.

A jacket isn’t like car keys. You lose your car keys, they could be anywhere. Down a crack in a lounge chair, under a book, in the ignition. With a jacket, particularly a conspicuous blue jacket, there are only a few places in a house it could be. And I’d searched them all.

Of this I was certain – the blue jacket was not in the house.

All I could think was that I’d taken the jacket to our daughter’s place in Sydney and left it there to be dry cleaned. But when I called her, she couldn’t recall having seen it.

Jennifer had no recollection of having seen the blue jacket recently –
But she said: Let me take a look.

She went upstairs.
Within twenty seconds, she called out: I’ve found it!

She’d found the jacket on a bed in a spare bedroom. It had been partly covered by some other clothing. She’d found it almost immediately, because she’d been calm.

She came down and told me that my emotional body had prevented me finding it, because I was anxious. Anxiety, which is simply a form of fear, robs us of our clear connection to our true selves.

When we have a clear connection to our true selves, there’s no such thing as loss.

Oh and by the way, I’ve decided to take the brown jacket instead…