For those of you not interested in my delving into the Weird and the Whacky, click over onto something else… something really boring, like Women’s Cricket.

That was my wife slapping me over the head.

Okay – A Dweller on Two Planets.
Intriguing title, no?

The book was “written” by a seventeen year old boy in 1883. Frederick S Oliver lived on a farm in northern California, and admits that he had very little learning or education when he came to write the book.

The book is extraordinary.

It’s written in a highly intellectual and complex style, and yet it’s very accessible. But the thing is, it’s simply not possible to believe that a seventeen year old kid without any education could have written such a tome.

In fact, he claimed he didn’t. He claimed he was merely the stenographer for an entity called Phylos the Thibetan, who channeled the work through Frederick.

The book was finally published in 1905, six years after Frederick’s death. The book was published by his mother, who along with his father, a medical doctor, witnessed and vouched for the circumstances of their son’s channeling.

Frederick says that Phylos would give him sections of text out of context, and even sentences and paragraphs in the wrong order, and would later instruct Frederick how to edit them so that they would make sense.

The book tells in graphic detail about Atlantis. And I mean incredible detail. More detail than is possible for a seventeen year old boy, barely literate, to imagine or write about himself.

The book also describes advances in technology and science which were yet to happen – including the discovery of X-Rays, telephony, high speed rail transport – and other deeper metaphysical subjects, such as karma and reincarnation.

Here is a summary:

Concerning itself with Atlantis, it portrays a first person account of Atlantean culture which had reached a high level of technological and scientific advancement. His personal history and that of a group of souls with whom Phylos closely interacted is portrayed in the context of the social, economic, political and religious structures which shaped Poseid society.

In that incarnation (as Walter Pierson, gold miner and occult student of the Theo-Christic Adepts) he travelled to Venus/Hysperia in a subtle body while his physical form remained at the temple inside Mt Shasta.

The book subsequently caused a furore on publication, and became a standard bearer for a lot of New Age thought which is still current. Its influences since have been manyfold, including the starting of the I AM discourses of Guy Ballard, and the Lemurian movement.

Frederick wrote most of the book in the shadow of Mt. Shasta, which if you remember Jennifer and I visited – when was it – last year? Mt. Shasta has become a very important place for those interested in spiritual and esoteric learning and discovery.

Read this book – A Dweller on Two Planets – and read it with an open mind. Read it knowing the circumstances of its writing. It will challenge your thinking about what you’ve been taught to believe is true. It costs less than a buck on Kindle:

There’s another book that I’m reading at the moment, which was also channeled – this time by Jesus Christ, through a highly trained academic. It’s A Course in Miracles, and it was written by Helen Schucman, an avowed disbeliever in God or Jesus.

She wrote the book from dreams, visions, and what she called an “inner voice.” She had another academic help her in the writing and compilation of what has become, some say, a New Age Bible.

The book is dense and complex and at times not easy reading at all. It challenges you and your beliefs on all sorts of levels.

But once again, knowing how it was “written,” you have to give serious consideration that perhaps there are things “behind the veil,” as the channeller for Kryon, Lee Carroll, calls it.

What do I believe?
I believe this stuff.
Sure.
Just like I believe in electricity.
And gravity.
And the sub-atomic nature of matter.
I don’t know how they work, but I still believe in them.

I subscribe to what Shakespeare wrote in Hamlet: There are more things in heaven and earth Horatio, than are dreamt of in your Philosophy. 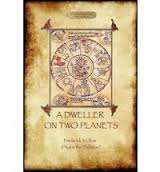 7 thoughts on “A Dweller on Two Planets …”