It’s been an extraordinary day.

We left Valfabbrica early, and headed off in cool sunny weather. The heat had yet to settle in. On the outskirts of town is a wall of hand painted murals depicting the story of St. Francis.

So, my record for rainless walking tours is intact!

Now, blatant self aggrandisement moment over, back to today…

We all wanted to walk this 14km stage into Assisi – even though it was going to be another difficult one – with two big ascents totalling nearly 600m.

This countryside once again was breathtaking. I’ve said this before, but this is the most beautiful walk I’v ever been on. But it’s also been the hardest – for me, most probably because of the chest infection I’ve carried for most of it. It has sapped me of energy, and I’ve found it hard to breath going up the hills. But it hasn’t stopped me, just slowed me.

The others have powered. Truly powered. 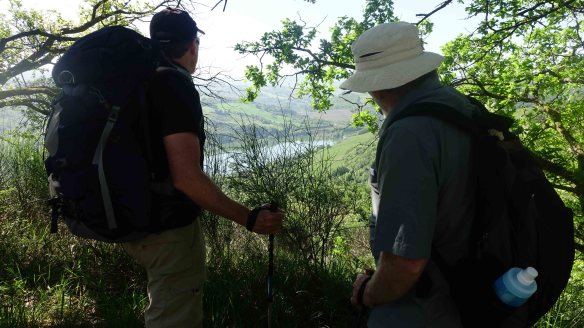 We stopped at a cairn with a cross on it – surrounded by rocks and pebbles left there by pilgrims. We decided to leave our bottle of barnacles, as a mark of respect.

(Thank you Lynda and Dale Lozner – we all wore our barnacle bottles each day, and I think it was fitting we left them there, in sight of Assisi… )

As we got closer, Assisi loomed. From afar, it looked magnificent.

At the base of Assisi is a statue of Padre Pio. 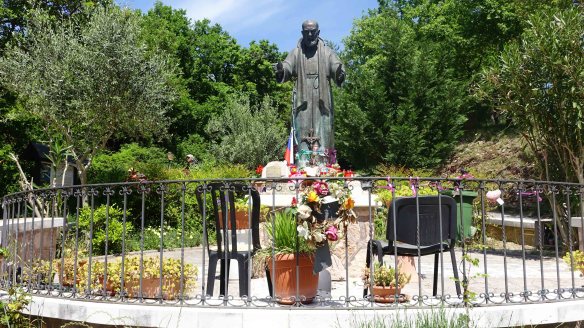 We were in good spirits when Marie walked up – 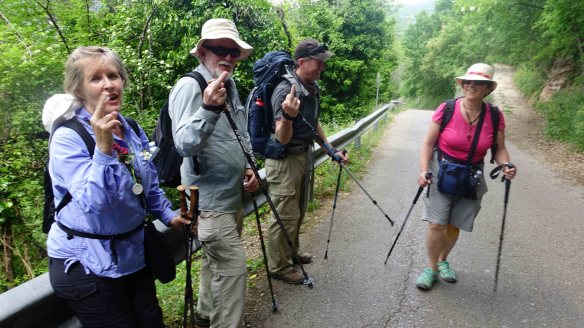 After a final long and steep climb we finally reached the gates of the town. 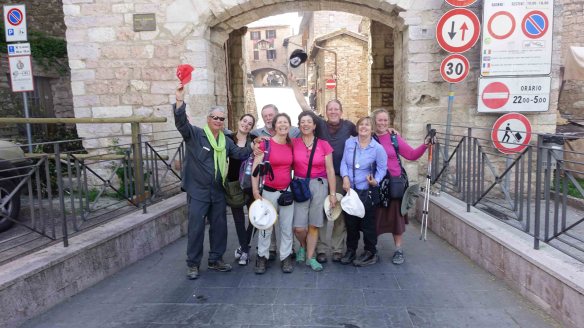 We celebrated by having a very long lunch at a Trattoria just inside the gates. We drank too much wine and laughed too hard and toasted Drop Bears too many times.

Peter and Ken had written a song about Jennifer, and how she (allegedly) has to put up with me – and over lunch they sang it to the old Donovan song Jennifer Juniper… I have a video of it which I will post separately. It’s hilarious, with Marie getting up and dancing.

Afterwards we went to the Basilica on the edge of the Assisi escarpment, which put the walk into a solemn context. We were humbled by the magnificence of the church, and by the spirit of St. Francis that enveloped us so very quickly and powerfully. 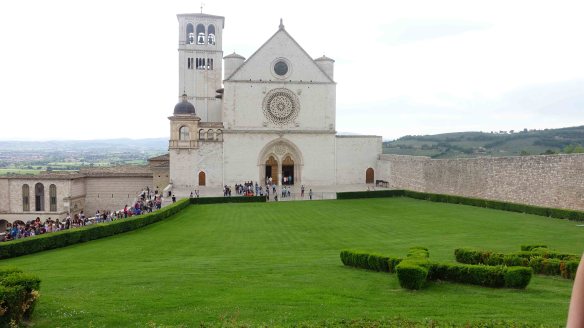 We went down into the lower levels, to the tomb where St. Francis’ relics are kept. Jennifer and I have been there many times now, and yet it still hits you with enormous power. The energies in that Basilica, and in Assisi generally, are extremely potent.

It’s the kind of place where you just have to sit and think. Some people pray, some people meditate, and some simply take stock of things that are important, and not so important, in their lives. You can’t walk down into those lower tombs of the St. Francis Basilica and not be deeply affected.

As hard as the walk has been, we all feel very strongly that it’s been worth it, to end up here in Assisi – one of the most powerful spiritual centres on this planet. 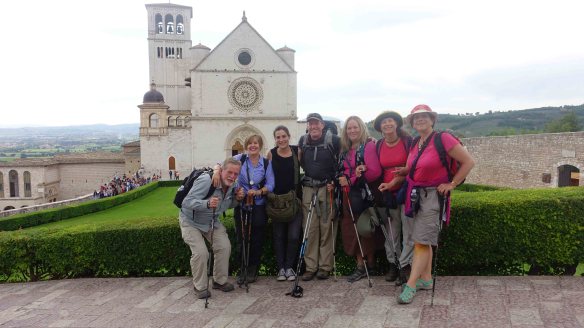