Today certainly was over hill, and over dale. I’m not sure what a dale is, but I’m pretty damn sure we walked over it. And it felt like it was through blood and fire too.

Three big hills, and three equally big descents. Only 20.5kms, but it felt more. The hills really tested the legs, and heart and lungs.

But it was beautiful. We left the villa later than we wanted – 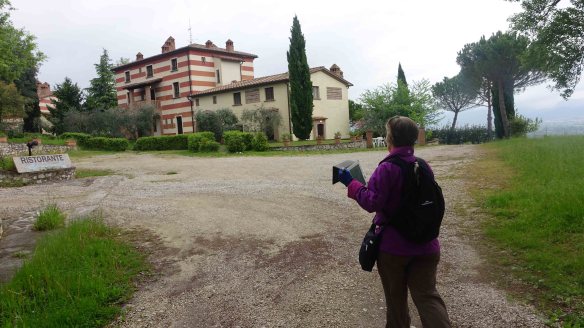 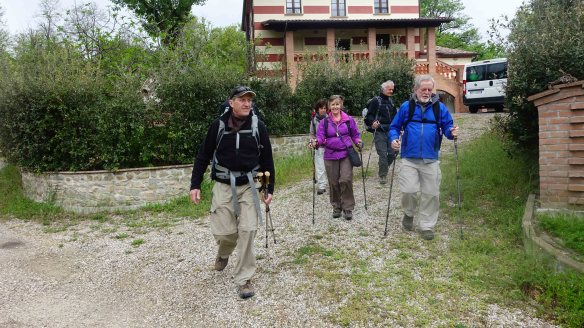 -then climbed steep and fast, and then we’d stop for a break and look around at some breathtaking vistas. Literally breathtaking! 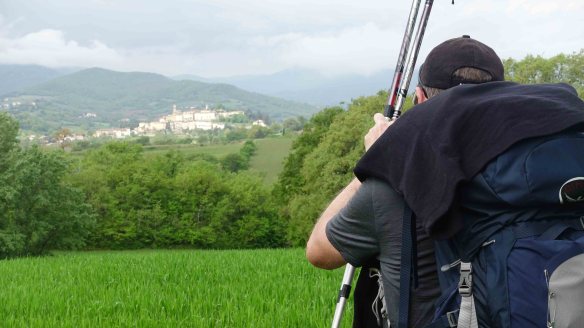 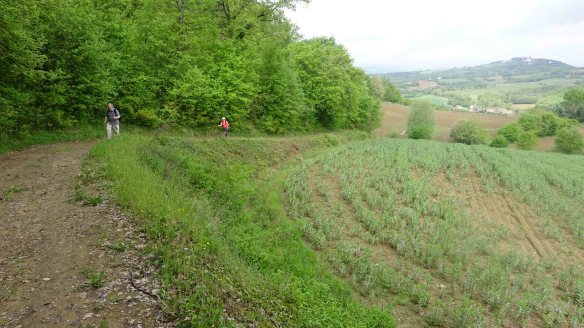 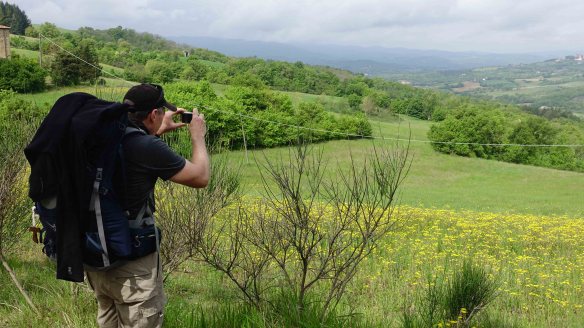 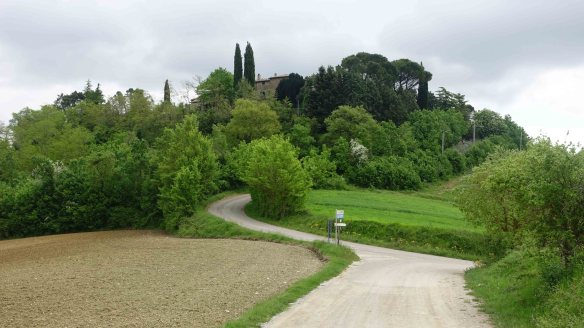 We stopped for a picnic lunch at a farm that made Buffalo Mozzarella. This place is famous for its Mozzarella As we walked in some well dressed dudes walked out, carrying fridge bags, stuffed with Mozzarrella. They’d bought the place out. We were pissed. Five minutes sooner, and we would have been able to buy some. 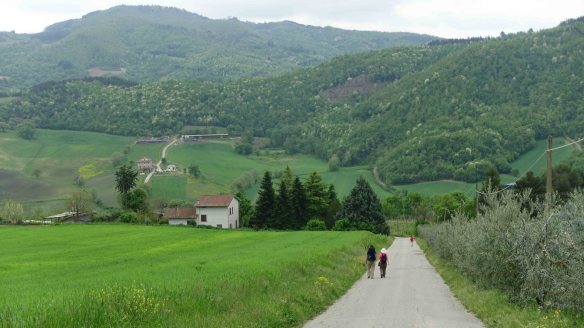 To add to the indignity, the farmhouse dog ran off with my Swannies cap! 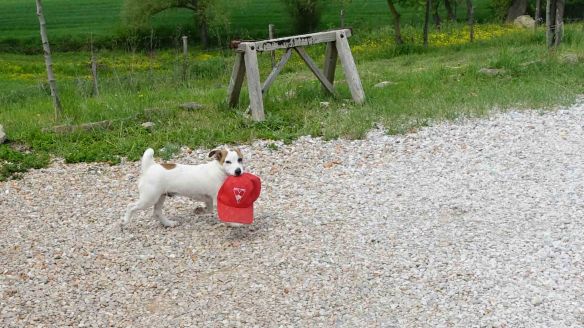 We had a picnic beside the farm, and bought some of their other cheeses, which were delicious. 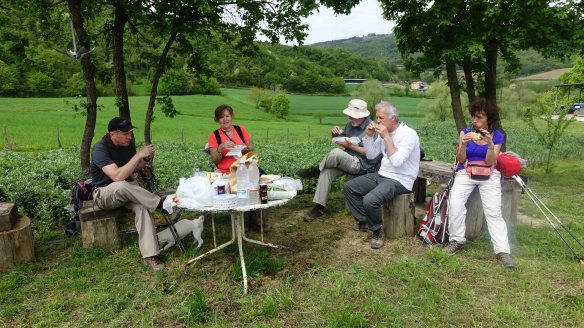 By we, I mean Peter, Ken and Angie, Ivan and Giovanna, and me. The others – Jennifer and Marie and Patty had started off later than us, walked up the hills we struggled up, and were hoed down in an Agriturismo further back having home made pasta and cheeses and chutneys. Oh and wine.

This is our group – the Serious Walkers Group – (not the Let’s Have Lunch at an Agriturismo Group) – in a chestnut forest. 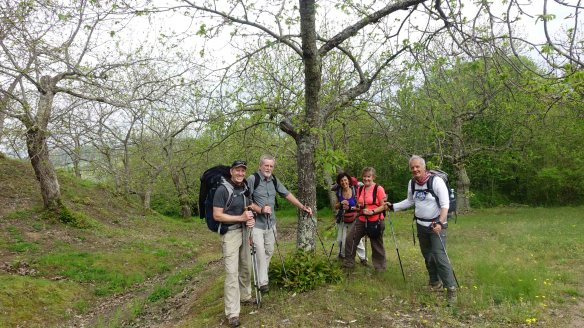 (By the way, an Agriturismo is like an Italian B&B, except they also serve lunches and dinners to passers by who aren’t staying there. They’re particularly fond of pilgrims on this route, and give them cut rates on rooms and food.)

We headed off to complete the day’s walk – the ladies of leisure stayed back to try some more of those delicious cheeses and chutneys, then walked some more, vanned some, and ended up at our end destination – Citta di Castella – at a bar knocking back Prosecco.

We meanwhile detoured past the buffaloes –

– and hit our third straight hill – our legs by now feeling like lead – and then we had a steep descent into the small medieval town. 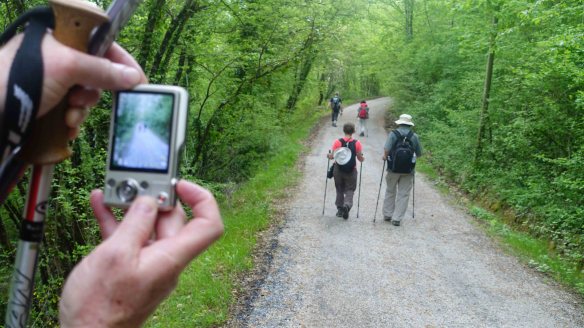 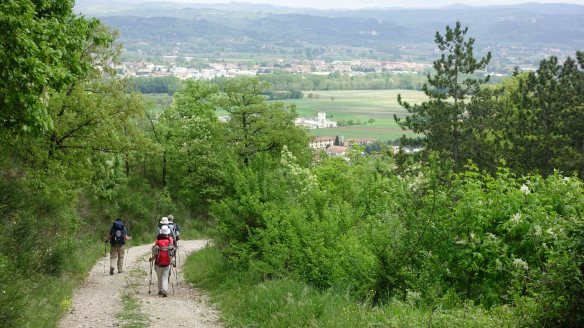 Peter and Ivan talked almost the entire way today – which really pissed me off because I had trouble breathing, much less talking.

And when we arrived in Citta di Castella there was a show in the main Piazza of vintage Fiats, going back to the original model. 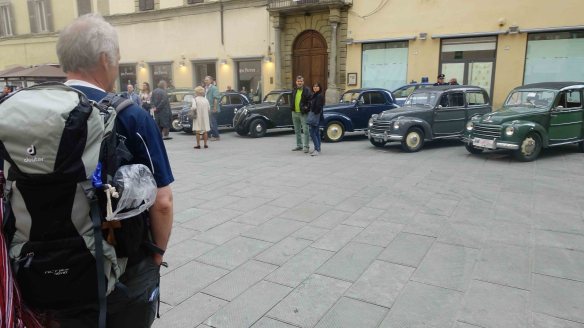 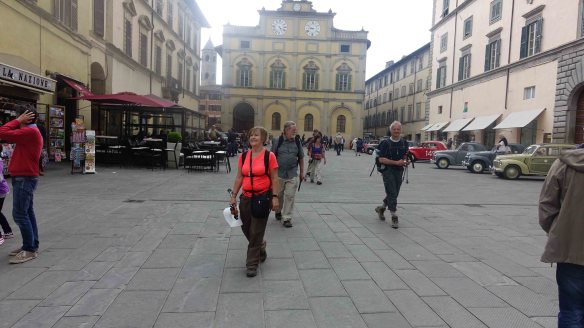 Later we had dinner at a lovely restaurant, and we caught up on what the others had done during the day. 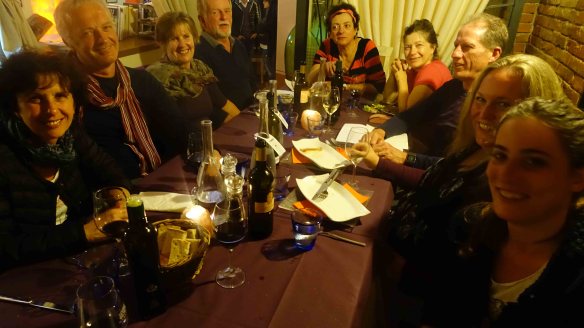 Tomorrow is the hardest day of the walk – 30kms, without any town along the way in which to have a meal or drink – and a total ascent of more than 800m.

But once again the beauty made up for the degree of difficulty. Vistas which don’t photograph well… you just had to be there. 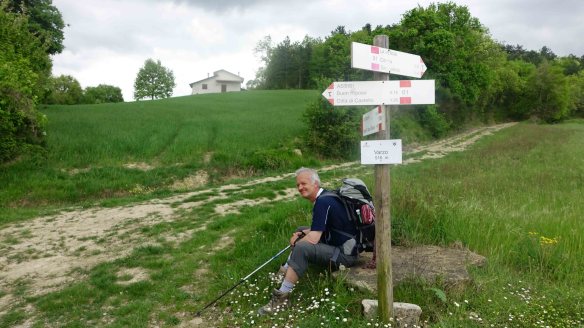