Skip to primary content
The Aragónes Way
This year was my first time on this section of the Camino, and there are still not many pilgrims who walk to Santiago on this Way.

I’m writing this having been on the Francès for a week (hooray !!!), and so perhaps these words will be a comparison rather than an impression.

From the Somport down to Jaca, the Camino is physically pretty much a continuation of the road from Oloron to Somport — picture a river valley, flanked by tall mountain ridges on either side, a main road, and the Camino weaving in and out of these up or down towards small mountain villages, and you’ll have a good picture of those miles.

One part is in France and the other in Spain, and the other major difference is that the Pilgrim’s hostels on the French side are more often Catholic, and those on the Aragón side more business-like.

Travelling through the Pyrenees on the Somport route can take several days, unlike at SJPP, which is easily accessed from various different non-mountain locations, and the Pyrenees crossed in a single day. After Jaca, the Camino follows the Rio Aragón valley westwards, and the surroundings become a magnificent vista of stunning natural beauty. The valley is broad, the Rio flows in its natural river bed, and one’s view of the land often stretches for miles, encompassing farmlands, blue mountains in the distance, woodlands and hills, roads and rivers, resembling the landscapes of a fantasy novel.

Three different Caminos have joined at Jaca, and now you will start to meet small numbers of other pilgrims, as you make your way towards Puente La Reina and the Francès. The original route of the Aragónes is, sadly, submerged under a man-made lake, and so the modern pilgrim climbs up towards Ruesta, and through some arduous sunburnt hills further south, until finally returning to the historical Way at the villages found just a few short kilometres from Eunate and Puente La Reina — although Sanguësa, the first large town of Navarra that one comes to, already has much of the feel of the Francès.

Eunate !!! A sheer delight of peace, elegance, and beauty — and I think the loveliest small church I have ever visited. It is hard to think of the Camino Aragónes ending at Puente La Reina — when in fact, depending on one’s being a cyclist or walker, and on whichever variant route one follows, one can join the Francès in several locations — whereas it feels clear to me that Eunate is truly the symbolic end of that Way, located as it is at only a stone´s throw from the Francès, and particularly as it is common for Pilgrims of the Francès to make the detour to Eunate.

It is a quiet Way, and so more suited to those seeking perhaps a more peaceful Camino far from the hustle and bustle of the social life of the jam-packed Refugios of the Francès, with the disadvantage that it also somewhat more costly to travel the Aragónes than the Francès.

I am glad to have walked that path, though I personally doubt that I would repeat the journey — I seem to have had my fill of the lonely and solitary Way of Saint James in 2005, and seem to need the presence of others on the Camino and in the evenings.

Joining the Francès was a greater joy than I anticipated, not so strong perhaps as my 2005 arrivals in Lourdes and SJPP, as I did not imagine that simply joining the road already travelled would feel so powerful. In hindsight, I think I was in greater need of the familiarity of the Francès than I imagined … 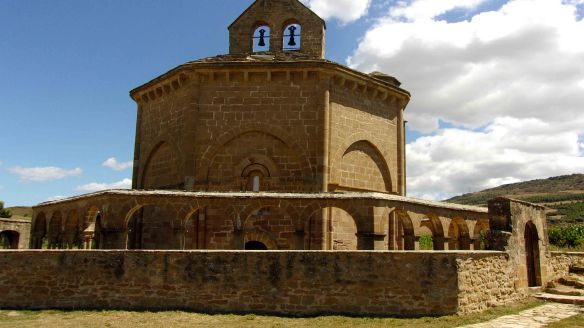