The Camino this time is still continuing to be very nice with me, which is most encouraging !!

The hitch-hike from Saint-Gilles to Lourdes was lightning quick (well, apart from the bit where I managed to head the wrong way on foot LOL), and Oscar, who took me most of the way, to within 10 miles of Lourdes, is an Italian bike pilgrim who will have done his first Camino stage today.

I arrived in Lourdes at about 6 PM last night, then immediately found a place selling Chimay gold top, a beer I had been wishing to taste for roughly 20 years, but even that pleasure was unable to lessen the beautiful joy of the Lourdes Pilgrim Hostel, as it is simply, and hands down, the BEST I have ever stayed in.

The internal wooden architecture instantly tells you that this isn’t just any old Refugio — while you’re here, it’s Home. The wonderful Jean-Louis is keeping it mostly single-handed, on a Donativo basis, and he provides not just a wonderful breakfast and a superb home-cooking supper — but also his fatherly kindness and warmth, so that his stuff is your stuff, his kitchen your kitchen, and your Camino is his joy.

Last night I was the only Pilgrim in the main dormitory, and there was only one other pilgrim in the Hostel — tonight though there is a mix, seven of us, four starting still Lourdes, two having walked in from beyond, and the last being a foot pilgrim to Lourdes who has therefore just finished his hike.

Five of us are walking on out tomorrow, so I’ll see which I’ll be bumping into along the Way …

I attended a Traditional Latin Mass this evening, just down the road, which naturally turned out to be the Mass of the Transfiguration, which is one of the most important Saint James Masses of the year (among many other aspects of course hehehe).

Looking terribly forward to start the Camino in the morning. 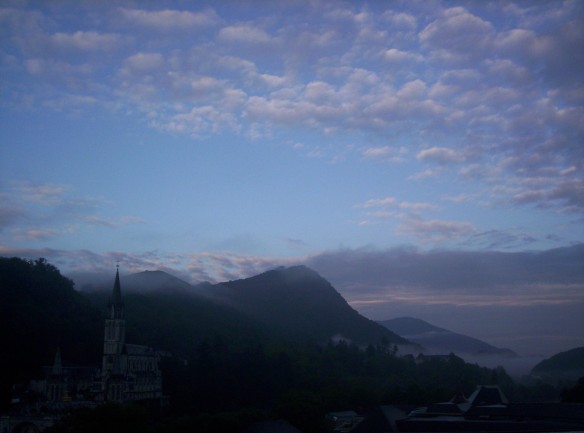