There’s a new film coming out soon in the US. It’s called Wild, starring Reese Witherspoon. It’s based on the best selling book of the same name.

It tells the story of a young woman in a state of distress because of the death of her mother, a failed marriage, a heroin addiction and bouts of promiscuity. So on impulse she begins to walk the Pacific Crest Trail up the west coast of America – a journey of some 1,100mls from the Mojave Desert into Washington State.

The book was championed by Oprah, which immediately made it a huge best seller. I found the book to be very moving, very engaging.

Here is a trailer for the film: WILD Trailer

I mention it here on the blog because of two separate conversations I had yesterday with some people about to begin their own long walks.

One was with a woman – a friend of Jennifer’s – who is a very spiritual lady. She’s been considering walking the Camino for some time. She has recently married a fellow who’s a walker – he’s done long walks all around the world – and soon they’ll be undertaking a trek through Turkey.

The second conversation I had was with my brother, whom I love dearly. He’s eighteen months younger than me, lives in Brisbane, and we’re very close. For sometime now he’s been considering walking the Camino with his son, aged 21yrs. His son saw the film The Way, and suggested to my brother they do the Camino together. Father and son.

I called my brother yesterday while he was going over options with his son. He asked me questions about the various Caminos – the Frances, the Le Puy, etc. They’re still undecided as to which route to take. And then he said: “But we might also do a walking holiday through Tuscany.”

Both conversations got me thinking about the spiritual quotient inherent in the Camino.

There’s no doubt it’s a walking holiday for many. It has all the ingredients; food and accommodation are cheap, it’s in an exotic land, you get to meet interesting people, it’s a healthy way to spend your holiday, and if you want, you can party until all hours in a country where the booze costs very little.

But the Camino is also a pilgrimage – an ancient pilgrimage – and for those who are seeking something deeper – a spiritual or religious experience – then it offers that opportunity.

I began to ask myself: Would I be interested in doing a long walk other than on the Camino? The Pacific Coast Trail for instance? Or doing a walking holiday through Tuscany or Turkey?

The bigger question is: Do you have to walk the Camino de Santiago to have a spiritual experience?

I’m firmly of the belief that the Camino has a spiritual energetic imprint along its sacred path, and that imprint subtly infuses itself into your soul as you walk.

That imprint is the result of millions of pilgrims walking that same route for hundreds upon hundreds of years. Each footfall of each pilgrim has left a subtle energetic residue which has leached its way into The Way.

There is a feeling of something inexplicable, something much greater, that resides there along the Camino, and which you can osmotically access should you wish to.

And yet, I’ve also been reading – researching – in preparation for the start of my filming in India in less than six weeks now. For those of you who don’t know, I’m starting filming on PGS – Intuition is your Personal Guidance System. It’s a feature length film about intuition.

I’ve been reading up on Quantum Mechanics and the Bootstrap Hypothesis, the Holy Spirit and it’s association with the Christian concept of God, Theosophy and Madam Blavatsky and her Secret Doctrine, the Eye of Shiva and the Eye of Horus, the Ancient Universal Religion during the Antediluvian Golden Age, glandular links with the chakras, Shackleton’s Third Man Factor and the Higher Self. And so forth.

Some heavy reading. And fascinating. (This is why I’ve been away from the blog a bit lately!)

And one of the things that I’ve been reminded of is that you can access a metaphysical state anywhere, anytime, if you know how. But first, you must have the intention.

The young lady who walked the Pacific Crest Trail, in Wild, had a profoundly transformative experience. But she had the intention to change. She knew that if she didn’t change, she would die.

I’ve always maintained that most people who undertake the Camino do so wanting a question answered. Often they’re not even aware of it, often they don’t even know what that question is. But I believe that question sits there within them during the walk, and somehow the Camino prises it out into the light, and provides the answer.

Sometimes the answer comes during the walk, but more often it’s well after the walk is done. The Camino creates resonances that sit within you for a long time.

So to answer two questions I’ve posed here: Do you need to walk the Camino to have a spiritual experience?

No – I don’t believe so. You can have a spiritual experience in your back yard, or doing the dishes, as some Zen masters would propose. I think walking the Camino helps – because of that spiritual energetic imprint – but I don’t think that’s the only long walk where you can commune with whatever your concept of God might be.

The other question I raised was: Would I be interested in doing a long walk other than on the Camino? The Pacific Coast Trail for instance? Or doing a walking holiday through Tuscany or Turkey?

No, it doesn’t interest me.

And that’s probably because I’m seeking something more spiritual and metaphysical when I undertake a long walk. I’m contradicting what I’ve just stated above – I’m aware of that – but perhaps I need that energetic imprint. Perhaps my nascent spiritual wiring needs the kind of jump start that a traditional pilgrimage route can provide.

Two conversations yesterday got me thinking. And it’s a fundamental question that almost everyone who walks the Camino asks: Why am I doing this? 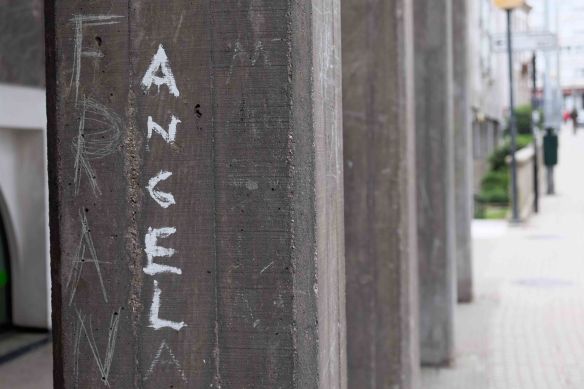 14 thoughts on “The Camino – a walking holiday?”