How can you judge whether you’ve changed after walking the Camino? Sometimes the changes are so subtle they go unnoticed, except by those close to you.

Sometimes though the changes are profound and significant.

I want to tell you a story which has shown me how profound the changes have been within me.

My wife Jennifer and I recently went to Ireland to research the possibility of mounting a Celtic Camino tour. I hired a car out of Dublin Airport through Hertz. For a small additional cost I was able to upgrade from a standard car to an Audi A3 that was nearly brand new – it had only 800mls on the clock.

On the third day we drove into a small town south of Dublin and parked in a carpark under a shopping centre. We then went for a walk to explore the town.

When we came back about an hour and a half later I noticed a handwritten note under the windscreen wiper. The note was written by a woman who had witnessed someone crashing into the side of my car while trying to park. 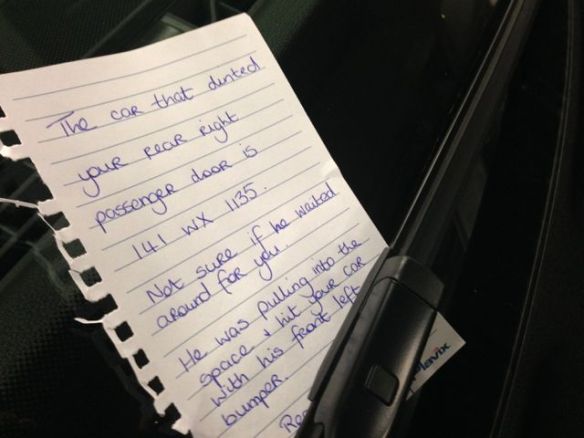 It was dark, and the car was black, and I hadn’t noticed – but on closer examination I saw that two panels had not only been scratched, but staved in. There was extensive damage.

The witness had taken down the registration of the car that hit mine, and in fact had confronted the driver saying that he should make an attempt to find the owner of the Audi. But he evidently brushed her aside, did his shopping very quickly, then drove off without leaving a note.

That’s what prompted the witness, a lady named Angela, to then write a note and leave her mobile number. It was very kind of her. She was an angel.

I called her, quite distressed by the damage to the car, and she was very sweet and said she would corroborate her account with the police and with Hertz.

I then went to the police station and filed a report.

Why was I distressed? Because I hadn’t taken out insurance when I hired the car. I believed my travel insurance would cover any rental related incidents. But I’d never actually read the fine print so I didn’t really know.

Also, when I upgraded the car, the excess was increased to €2000.

i called Hertz and told them what happened. They informed me that even though it wasn’t my fault, I was still responsible for the damage until such time as their insurers could get restitution from the driver of the car that hit me.

So they would be deducting €2000 from my credit card.

Before the Camino, this is how I would have reacted: I’d have been angry at the driver for doing such a lousy thing and driving off without leaving a note. I’d have been angry at Hertz for the injustice of my having to pay for damage that wasn’t my fault. And I’ld have been anxious for the rest of the trip, worried that my insurance wouldn’t cover the excess.

I would have regarded the whole incident as a personal attack – as though the universe was conspiring against me to destroy my joy at being in Ireland.

i would have talked about it with Jennifer the whole trip, ruining our time in beautiful Ireland. And most probably I would have called my family and whinged and gone O woe is me. I would have regarded myself as a victim of a foul act and a massive injustice.

In fact none of that happened.

When Jennifer and I realised what had happened, we did a high five in the carpark and we laughed. We made the decision then and there that it wouldn’t bother us, and that everything would work out as it should.

You can’t find a bed? Then sleep in a field under a tree. That’s the worst that can happen. And hey, it’s a fine night. That’s not so bad.

I figured in this instance, the worst that could happen was that I’d have to pay €2000 to Hertz. Losing €2000 for something that wasn’t my fault? Sure, that stings, but I wasn’t going to let it bother me. It’s only money after all. No-one was hurt. No-one was killed.

I wasn’t going to let it spoil the trip.

I didn’t allow myself to think about the actions of the other driver – whether what he did was right or wrong. I figured that was his stuff which he’d have to deal with. How did he feel doing that, and driving away? Probably not good. Irrespective, I wasn’t going to allow his energy to impact on my energy, and Jennifer’s.

I put it all in the hands of the Universe, and trusted that everything would work out. And then I left it at that and didn’t think any more about it.

Over the next ten days or so while driving around Ireland I never discussed it again with Jennifer. When I handed the car in the manager at the Hertz Office looked at the damage and tut-tutted – and said that yes, it was unfair, but I would still have to pay the excess.

He then proceeded to take €2000 off my credit card.

I didn’t complain, I didn’t gripe – I joked with him and walked away. That would never have happened prior to the Camino. I would have bitched bitterly.

When I returned home I only mentioned it in passing to a couple of people. I didn’t make a big deal out of it. And I didn’t criticise the driver. He would have to deal with his own karma.

I didn’t allow it to impact me. I got on with my life.

Everything worked out. The insurance company handled my claim efficiently and respectfully. Yesterday I got an email from them saying that they’d deposited the full claimed amount into my bank account.

I was pleased, but I wouldn’t have been angry or disappointed had they decided not to allow the claim. I’d worked out what was the worst that could happen, and that was ok.

(I am posting this from LAX and will be in the air for the next 15 hours or so!) 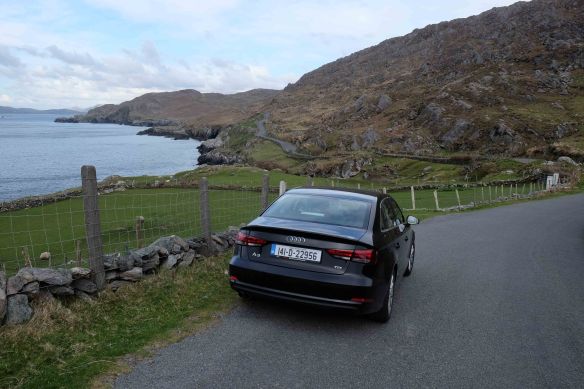