Today was our second last day in Ireland, and our last day on the west coast.

Tomorrow we drive through to Dublin, where we overnight before hopping a flight back to Australia.

Ireland has been amazing. Apart from the countryside and landscapes being beautiful beyond words, and the pure inherent magic of the place, the Irish people have been so incredibly friendly.

I’ve not met one person who didn’t go out of their way to help or share a laugh.

Today once again was perfect weather. I know I harp on about this, but everyone is amazed there’s been such a long stretch of sunny days without rain. Highly unusual for this time of the year, they say.

It’s a simple application of the Spiritual Laws of Attraction.

You might think I’m a total whacko, but that’s what I believe. And before I started this trip, when I thought of my time in Ireland, I thought of the weather being good. Same as I thought of our Camino Portuguese.

Here’s something for you – before I left Australia, I did a small film for the Stockman’s Hall of Fame out of Longreach. Dick Smith asked me to do it.

Dick has been a supporter of mine ever since he financed my first two independent documentaries back in the early ’80s. We’ve stayed in touch ever since, we’ve remained friends, and when he asked me to do this film, I agreed. I owed him.

The film was to be shot out at Longreach, in the far west of Central Queensland. Longreach had been suffering from a devastating drought for the past 18 months. It had sent several cockies to the wall, with the banks moving in and taking over properties that had been in the family for generations.

Many more graziers were hand feeding their stock at considerable expense, knowing that this was unsustainable.

I arrived before the film crew and met one of the key graziers in the district, as part of my initial research. Over a cup of tea I laughed and said that the drought would soon break, as soon as my film crew arrived.

I said it always rains in the Outback when I start shooting.

The grazier looked at me ruefully, and smiled. Disbelieving.

The crew arrived Sunday. It started raining the day before, on the Saturday. After eighteen months, the drought had broken. The grazier I’d spoken to couldn’t believe it. That initial burst of rain didn’t do much good – they needed much more. And we needed dry weather for filming.

By the time we were ready for filming, the rain stopped. And shortly after we wrapped and flew back to Sydney, the rains came again – heavier, and they lasted. The drought well and truly broke.

What do I make of this?
I don’t really know.

But I do know that we create our world with our thought. Every aspect of our world.

Today Jennifer and I walked from our village of Doolin, following a coastal path that led us to the Cliffs of Moher. 10kms there, 10kms back. 20kms for the day.

It has to be one of the most spectacular walks I’ve ever done.

Again, my photography doesn’t do justice to the majesty of the landscapes, and the seascapes – but here are some shots… 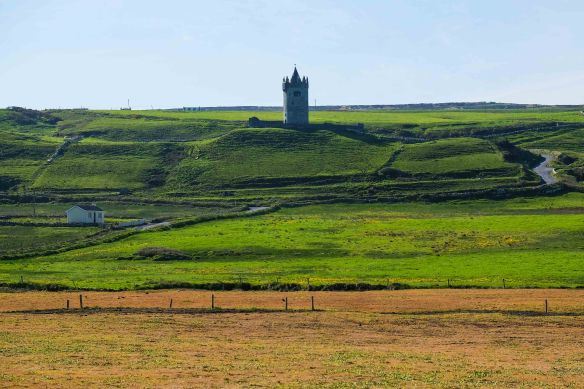 Note Jennifer below on the path centre left – barely visible.
That gives some idea of scale… 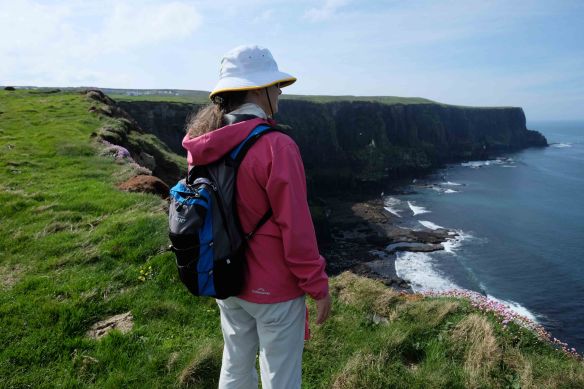 10 thoughts on “Celtic Camino – walking the Cliffs of Moher”