I woke up this morning not wanting to walk.

Yesterday I felt like I could walk halfway across Spain. This morning I would have been quite happy taking the van.

But I can’t do that. Nor can I offload my backpack, which with water and iPad etc is coming in at about 10kgs.

Caterina eats bananas with a knife and fork. 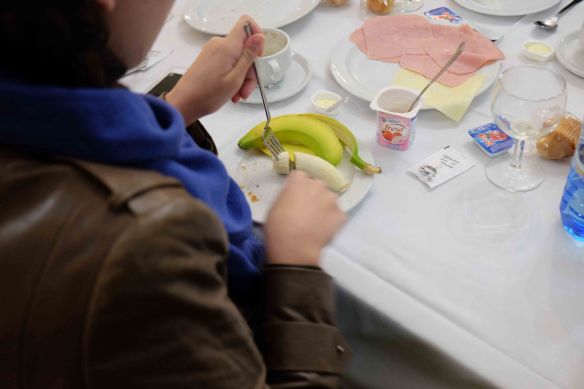 Caterina is embarrassed about this. Evidently on previous mornings she’s built a screen around her plate with napkins. This morning she tried to hide it from me, but I can be persistent.

I got the shots I needed to prove to the world that she does indeed eat bananas with a knife and fork.

I think she probably believes that anyone who eats a banana with their hands most probably has a prehensile tail as well. (As most Queenslanders do…)

Anyway, my spirits were momentarily lifted by this anomaly in Caterina – shortly after, I headed out with Steve.

Steve is a truly fascinating bloke.

Some of you might already have formed an opinion of Steve – but most probably that opinion is wrong.

Steve is 71, divorced just recently from his third wife, and has stated clearly that the only reason he’s come on this tour is to spend time with me. 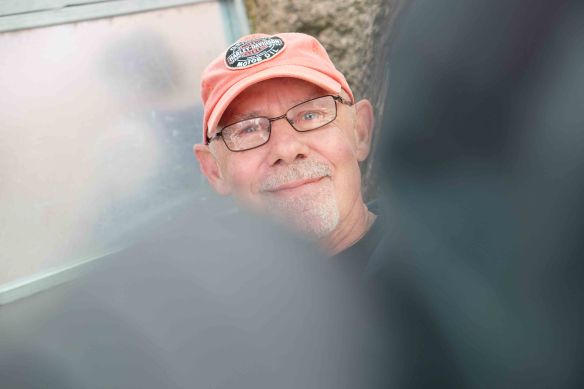 Steve and I met through this blog. A friend of his last year had alerted him to the blog, and he joined as a follower on day 12 of my Camino. He then started his own blog – and I became a follower, because he and his previous wife began their Camino Frances a week after I finished mine.

While I walked he commented on my blog – while he walked I commented on his blog. And in the process, we became mates.

He’s Texan, a bodybuilder, almost churlish with his economy of words. His reading list is mainly books on Navy Seals – my reading list goes from Dickens to Salman Rushdie to Jo Nesbo.

He regards our differences these ways: Says Steve – I’m better looking, I’m smarter, I’m more affable, I’m definitely sexier, and I have pecs not boobies. Women love me, he says – and dogs too.

Arlene says our differences are: Bill, you’re taller, you have hair, you have an accent (Australian), you both have terrific smiles – and it’s a draw when it comes down to who’s the more sexier…

(I think Arlene is being very kind to me…)

Anyway, Steve and I walked 23kms today and we talked most of the time. Here are some of the things I learned about Steve today –

All this I learned today while walking with Steve.

He loves dogs, and dogs love him.

He helps people with their backpacks.

He walked over to kick away a screw that he saw on the road – he worried that it might puncture a tire.

You might think you know Steve, when he poses for photos – you might have formed an opinion about him, but you don’t really know him.

I certainly know more about him after our walk today…

He says that he’s happier now than he was back then, at the height of his wealth and power. He now lives within his needs, not his means.

And he now lives without expectation and judgement.

He has a pared down existential view of life – forged by his extraordinary backstory.

By the way, I wrote this blog with Steve’s full concurrence and approval. He vetted this post before I published it. 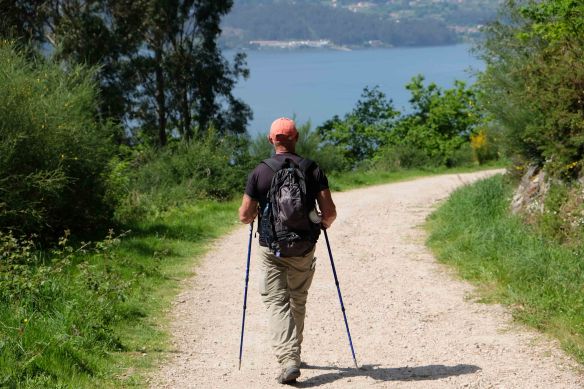