I must have been tired.

Got to Tui, had a beautiful home cooked style lunch, had some wine, went to the room, and woke up eleven hours later!

I never do that.

So that’s the reason this blog is late. Sorry about that!

Now I’ve got to remember what happened yesterday… oh yes, that’s right – drove out of Caldas de Reis in the rain. Sorry Steve, would like to tell you the rain stopped, but yesterday the rain was pretty damn consistent.

The hotel we stayed in by the way was situated right beside the stream that cuts through CdR, and had a glorious view. 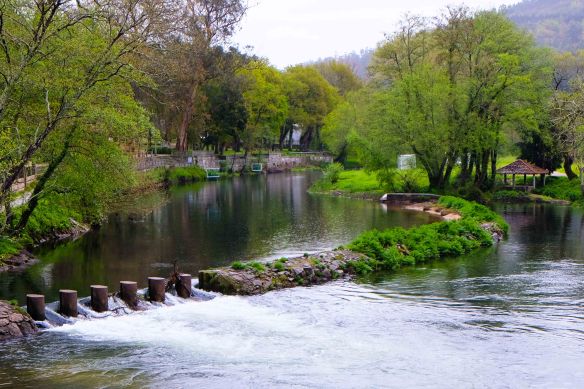 Drove south, checking out the hotels we’ll be staying in along the way. Stopped at a gigantic supermarket and brought some groceries. I love wandering through Spanish supermarkets – with the hams hanging and the gigantic fish on display as thought they’ve been plucked straight from the sea.

Got to Tui and our little hotel nestled right beside the Cathedral in the old town. The Cathedral was very dark inside, with pre-recorded hymns whispering through hidden speakers.

The Cathedral is quite unique in that it looks like a fortress, with it’s crenellated towers – Tui looks across the Mino River to Valenca, in Portugal, and it was a fortress when it was first consecrated in the 13th century. 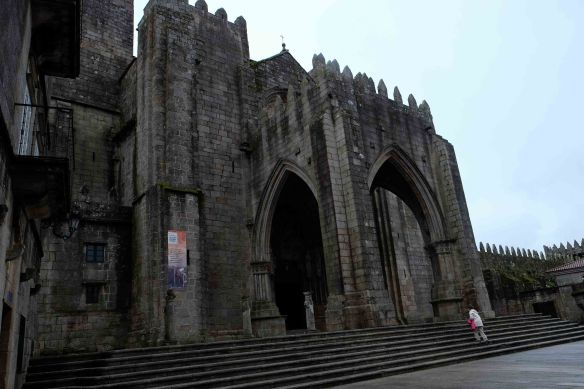 Had lunch in one of those places where from the outside, the restaurant looks dowdy and unbecoming, but the prices are good. Walked inside and the joint was bustling with locals.

The food was like mama’s cooking – a local pasta soup, then spare ribs in a stew, surrounded by boiled potatoes that melted in your mouth, followed by an extremely yummy home made desert that was part flan, part tart. Beautiful.

All for the princely sum of €9.

Oh, and I also had a bottle of Rioja. Well, not quite a bottle, but I did give it a bit of a nudge. That’s what put me to sleep. And pure exhaustion from the flight over.

Today we’re heading into Portugal, and will be staying overnight in a wonderful casa rurale in Rubiaes.