I found while walking the Camino I became very sensitive to sound.

During my months of training, and in all the years I've been walking, I've always listened to audiobooks on an iPod.

I chose not to on the Camino.

I wanted to use the time to think, without interruption. Without distraction. I took my iPod, loaded to the 16GB max with books and music, but that 100gms of weight never came out of the pack. Not once. Not even on the plane home.

An unintended consequence of this is that I noticed my hearing improved. Or at least, it became more sensitive to sounds.

I heard birds. I heard streams and rivulets I couldn't see. I heard the wind.

But I also heard things I didn't want to hear.

Cars coming up behind me sounded disproportionally loud. They would whoosh past me and they were violent. That's the word that kept coming to me as a car screamed past. Cars are violent.

My issue with the influx of pilgrims from Astorga on wasn't that they were short-cutting the Camino, or that there were so many of them, it was that they were loud.

Their laughter to me seemed like shrieking, and their footsteps sounded like soldiers with boots on the march.

That's what upset me the most, the noise they were making.

My hearing had become so sensitive, and attuned to the natural sounds of the Camino, that extraneous sounds were almost painful. And at times they were disturbing.

I'd become to regard the sounds of The Way as sacred. Church-like. You don't shriek in a church. You don't talk loudly. You don't clomp your feet. You respect where you are.

As a filmmaker, I understand sound. Not many people realise that when you're making a movie, you spend more time collating and editing sound than you do image. It's way more complex.

There is no such thing as silence. It exists in space, and in hermetically sealed environments, but nowhere else.

The Camino was never silent. There was always a cacophony of sound, if you cared to listen, even on the Meseta.

Especially on the Meseta.

Now, many of my most wonderful memories are of things I heard. The cuckoo birds. The rush of water by the track outside of Samos. The wind on the high plains. The distant sound of cowbells in misty Galicia.

My camera enabled me to see, but in not using my iPod I was able to hear. 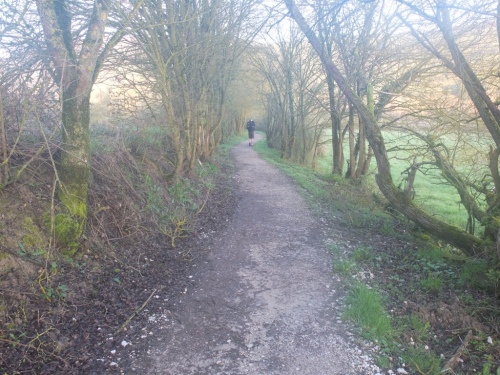