Staying at this ashram, I really have lost sense of time.

Amongst the chaos and craziness of India, it’s a calm tranquil oasis. I’d always been a bit intimidated by the notion of an ashram. The word conjured images of spartan places of hardship and discipline. But I could not have been more wrong.

This ashram is set in immaculate gardens, full of shimmering white statues of gods and goddesses. There is an easy going air about the place – a warmth and generosity of spirit that immediately presses a re-set button deep inside you. bringing you back to your default humanistic state of kindness and compassion.

Here are some pictures – including some shots of our room, overlooking the Ganges… 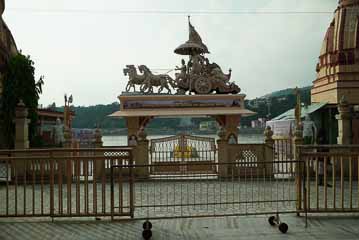 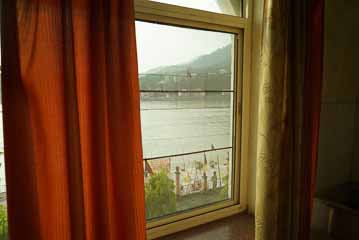 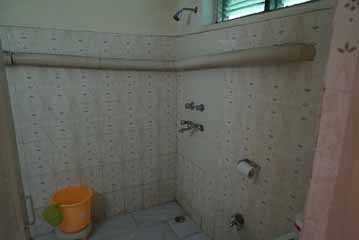 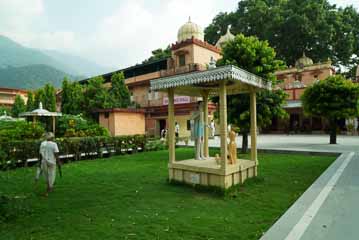 I’d also always been intimidated by the level of yoga I thought would be taught at these retreats – but filming a class this morning, I saw that it was easily achievable, even for beginners. There’s probably an elite class somewhere indoors which I haven’t yet seen, where you’re taught how to turn yourself into a pipe cleaner.

My routine while here has been to get up before sunrise so that I can shoot in pre-dawn and sunrise light – then by 8:30am the light has become too harsh so I have breakfast in a small cafe near the ashram. Jennifer and I have an Indian breakfast of simple dhal, curd, and freshly cooked roti. With masala tea. Beautiful. All for 100 rupees, which is $2.

Today though was really about the interview with Swamiji Chidanand Saraswati. He’s regarded in India as a living saint. And having met him now a few times, there’s no doubt that he is a true holy man and spiritual leader. The interview was set for 12pm – but midday came and went, and still we waited. At 1:45pm the beautiful Sadhvuji came out to say that Swamiji had reluctantly had to cancel, because he’s traveling overseas tomorrow and was overwhelmed with work.

I was disappointed of course, because the interview would have been the highlight of the trip so far – however Sadhvuji told us he will be in Delhi second week of October, where he’s to attend an event to celebrate the publication of a six million word encyclopaedia on Hinduism, which is a pet project that he’s brought to fruition. Sadhvuji said we I could interview him after that.

It means changing flights and accommodation and shifting things around in my schedule, but I feel strongly that this interview will be very important for the film – and not only that, but there might be other people at this event that could be worth interviewing.

Including possibly the Dalai Lama.

Interestingly, I received an email today as well to say that the Dalai Lama has had to leave Dharamsala, and won’t be back until later in the month. But he could be at this Hindu event, where he might be more accessible. His personal secretary, whom I’m liaising with, is being very protective of His Holiness, which is perfectly understandable. He’s an elderly and venerable man – one of the great leaders of the world – and it’s very presumptuous of me to believe I could get an interview with Him.

But equally, I believe very strongly that this film is going to have an impact – a big impact – throughout the western world, and spiritual leaders like His Holiness, and Swamiji, can offer great wisdom and counsel to us all.

Anyway, once again I thought it was strange timing that I’m informed that the Dalai Lama now won’t be where I thought he would be – but he’ll be somewhere else where I’m going.

We’ll still go to Dharamsala even though HIs Holiness won’t be there, because the northern state is a centre for Tibetan Buddhism. I’d like to include in the film the Buddhists’ beliefs on intuition.

I’ll leave Parmarth Niketan Ashram tomorrow with great sadness, because in the short time I’ve been here I’ve been made to feel very at home. I love the ethos of the place, and of course I feel I have a strong leaning towards the yogic philosophies.

(here is a pic I took of Swamiji last night, during a Q&A on pollution in the Ganges.) 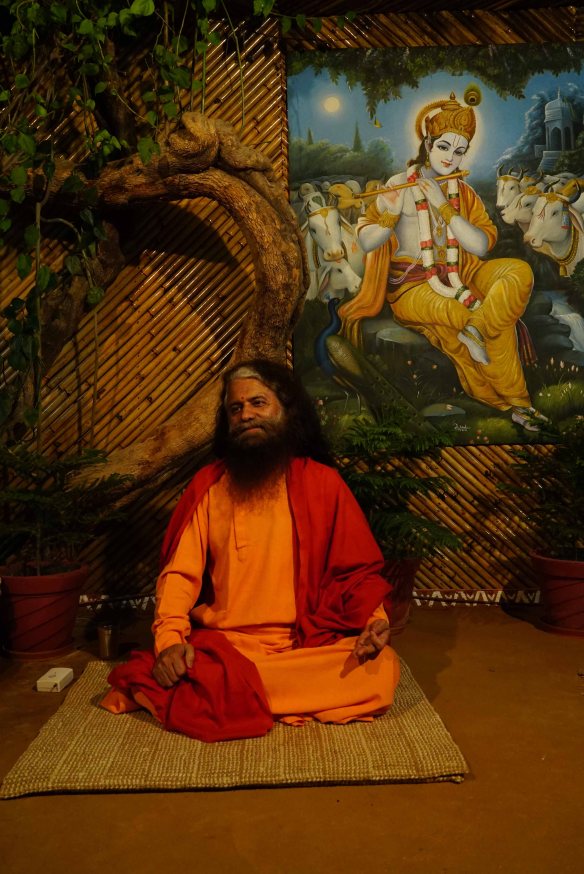